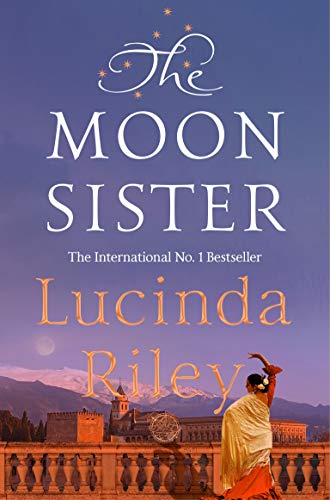 After the death of her father – Pa Salt, an elusive billionaire who adopted his six daughters from around the globe – Tiggy D’Aplièse , trusting her instincts, moves to the remote wilds of Scotland. There she takes a job doing what she loves; caring for animals on the vast and isolated Kinnaird estate, employed by the enigmatic and troubled Laird, Charlie Kinnaird.

Her decision alters her future irrevocably when Chilly, an ancient gipsy who has lived for years on the estate, tells her that not only does she possess a sixth sense, passed down from her ancestors, but it was foretold long ago that he would be the one to send her back home to Granada in Spain …

In the shadow of the magnificent Alhambra, Tiggy discovers her connection to the fabled gypsy community of Sacromonte, who were forced to flee their homes during the civil war, and to ‘La Candela’ the greatest flamenco dancer of her generation.

As always with Lucinda’s novels, The Moon Sister transports the reader to various locations.

Kinnard Estate isn’t real sadly but it is located close to the town of Tain in the Highlands. Here. the landscape is one of deers, moorland and vast open space. There’s the legend of the white deer which says if you see it, it can bring luck. Some try to hunt the creatures as in this book.

The land here is rugged and wild and Tiggy feels at home and yet so far away from where she feels she belongs. She makes a close friend with Chilly, the Spanish gypsy who lives on the estate.

Her father’s letter brings her here and the story of Chilly also has its roots in Granada.

This is the city of Flamenco and dancing. Lucia excels at this in the novel and we see her perform at the stunning Alhambra Palace, perched high on the hillside. The main part of the story is set here and becoming immersed in the world of flamenco is an experience you’ll never forget.

Where much of the novel takes place. This part is particularly interesting as we go deep inside a fascinating part of the city – the Albaicin and the Sacromonte hills where traditionally, the gypsy folk lived. You can wander through the very narrow and winding streets and see  the white washed buildings and of course the caves. There’s a cave museum to further explore the traditions and culture of the area,. This is where Lucia’s family live and where Tiggy’s story really starts to take off.

It’s a very musical setting as people play guitars in the streets, they dance and sing and despite the poverty, they are proud and cultured people.

There’s also a visit to Barcelona where Lucia goes to continue her dance career and Madrid but the later is only briefly during the war.

Some of the characters travel here in the search for a change in circumstances. The journey over by boat is long and arduous and the conditions there, once in Mendoza are only a stop gap until the boat sails for New York and the new world.

The boat arrives at Ellis Island but from there it’s a whirlwind of theatres and dance shows. This is the city where they can make their money, and Lucia can be a star…..