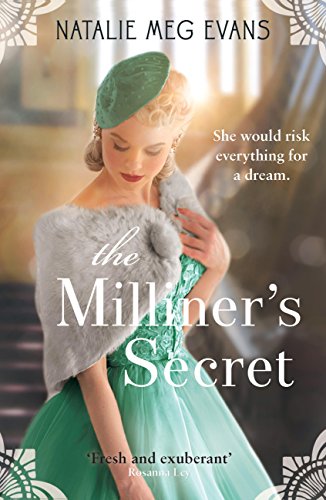 1940s – Natalie Meg Evans has transported us to Paris of haute couture with The Dress Thief, now she takes us to the dark days of the occupation in Paris through the eyes of a young milliner…A milliner with a Secret…

What cost the price of fame?

Cora Masson is a young, poor and  disenchanted young girl working in London. Her life is not a happy one for various reasons and one day is given an opportunity to change her life. She dreams of becoming someone and making something of herself.  A dressmaker to the elite. So she changes her name to Coralie de Lirac, moves to Paris and invents a past to push her to the front of the chicest Parisian circles. She lives with her German lover whose influence gets her noticed.
Working as a Milliner, she becomes a success but then German soldiers invade the city. War has arrived and life is going to change. But with such a mixed background, what is real and what isn’t and can Coralie survive the biggest challenge of her life?

The World of Paris fashion is both a sumptuous and difficult place to be. At first Coralie’s world is one filled with love, expectation, fashion and new hats. Her German lover Dietrich takes her the famous milliners La Passierinette on Boulevard de la Madeleine for the first time, a hat emporium that will be the focus of her life in Paris –

“She studied the shop, likening tis pink walls and the overblown chandeliers that cast reflections on the hats in the window.Grey and pink hatboxes caught her eye.”

The shop opens Coralie’s eyes to Parisian life and to the secret life of Dietrich. There is something about the shop, the hats and the women who work there that entices and frightens her. She is a frightened gazelle in a new world that she is determined to conquer.

This is the world of the French Expo, so the city is abuzz with new fashions, new faces and a new sense of excitement. At the same time the Nazis are encroaching on the city – even the German pavillion is floodlit with an eagle dominating its roof. Coralie’s sense of wonderment is tempered with the knowledge that her secret identity could be unmasked at any time.

The city is changing and fast. Coralie’s determination gets her a job at Henriette Junot’s milliners shop catapults her into the fashion milieu of the city of lights. Women clamour for her designs and style but her facade feels as fragile as the delicate butterflies which adorn the hats.

When the war comes, alliances and friendships start to unravel like the silken threads of the milliner’s hand.

“Friendship was dangerous and human sympathy was rationed.”

War is like the ultimate veil which descends dangerously on the city, and identities become blurred and something to dress over rather than display proudly. Coralie’s work continues but the war takes her friends, changes her life and questions her reasons for being there.

Coralie’s Paris turns into a network of shadowy alliances, dark corners, shady characters. Hitler has plans for the Jews of the city, whilst others have plans to stop his torment. Life in the Resistance becomes increasingly possible but Cora/Coralie is trapped not only in Paris but between her conscience and reality. In the lush hotel Lutetia in Boulvard Raspail –

In the marble foyer, icons of Nazism were everywhere, superimposed on the lush decor

Paris now is caught between two worlds, just like Coralie and her  dreams. Friends disappear and Coralie is all alone.

A sumptuous world of hats, milliners secrets, styles and a woman trying to find her way in a dangerous world.

Cora/Coralie is living a dangerous life. She escapes one world to enter another but the war shows her the fripperies of life can be dangerous. Oh and the trouble she had masking her identity almost getting caught several times!

The thrill of being in Paris fashion circles (mentions of characters of the author’s first book The Dress Thief really added to the atmosphere of this very real world) only to find war encroaching on every aspect of life was fascinating and Coralie ran into danger so often it was scary. The way she coped with Dietrich, their shady friends, friends going missing, violence and scare tactics made her grow as a character ad what I at first thought was going to be a romance in war time PAris was soon anything but.

The deportation of Jews contrasted with the Paris elite’s need for a fine hat and it was this which really evoked the irony of war. Not being allowed to wear the colours of the Marsellaise, or speak freely was vividly portrayed as Coralie learned to find her way in the dark.

From start to finish, an enthralling and captivating tale of war time Paris. The horrors of your friends going missing must have been horrendous and Coralie was tenacious and determined.

So many issues in this book that I think it needs a sequel  – I’ve not seen Paris painted like this before. Fascinating.