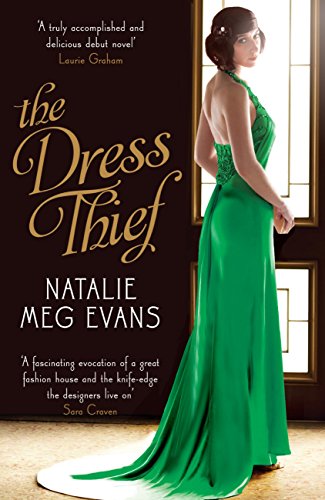 1930s: This is a stunning, sumptuous and silky journey back in to the heyday of Paris fashion scene and an insight into the copyists – those who sketched and stole the designs of the biggest fashion houses in order to produce cheaper copies.

This is the side of fashionable Paris you have not seen before!

Entering this world comes at a price for Alix Gower and her attempts to make her way in the world of haute couture. She dreams of becoming a designer in a leading fashion house. She is given a chance in a million but only if she steals the designs. Does she have a choice? She is determined to become a designer despite being the poor, illegitimate child of a mother who was an Alsace Jewess and father from England who both died too young. It is something she is hungry for and she has to support her remaining family after all. But what will be the cost if she gets caught?

Wrap yourself in the satins and silks of the season.

Paris is shiny on the surface but there is a rough fabric of society underneath. It’s a world of contrasts – draped in shiny fabrics but within the shadow of the bombs and despair.

The fashion district around rue du Faubourg Saint-Honoré is a cut throat world. Alix hesitates here before going inside the famous Hermes store to look at a design before returning to the fictitious Maison Javier located in Rue de la Tremoille where she works.

One good design is a godsend, a second is a steal.

The maid gave the directions. ‘Come at seven. A taxi will take you away at eight as Madame has an engagement. Do not mention Madame’s name to anybody at your place of work, or at home.’

What about  a fake beard and a big hat? Alix muttered as she hung up. It was starting, the theft. She felt sick.”

People sit in cafes such at Les Deux Magots in Bld St -German and discuss the war and what is going on. Artists and the like congregate there as does Alix when she meets someone and he gives her some flowers wrapped in a ribbon of Lanvin blue….

A town, but really an event. A bombing.

To fully understand the history behind the places mentioned, the two sites of Durango and of course Guernica which was famously bombed then painted by Picasso. The painting can be seen in Madrid now –museoreinasofia.es/guernica

There is also a mention of London – Wandsworth where Alix leaves before leaving for Paris, and a little piece of London history – Alix works at the Arding and Hobbs Department Store was ravaged by fire in 1909 fire and then rebuilt with the name Allders although some of the old signs could still be seen. It is now part of the Debenhams chain and is located at Northcoate Road, Clapham.

As we enter the world of The Dress Thief, Natalie Meg Evans not only takes us on a tour of the fabrics, styles and colours, but the atmosphere in the sewing room and stores, the backdrop of war and the intricate dealings of the human spirit.

Behind the scenes -for it doesn’t seem enough to call them chapters – are breathtaking. Those in the ateliers illustrate the world which Alix and now we the reader are very much a part of.

Alix is a great leading character – fighting for her family, with a hunger to belong and work within the fashion world but then with a chance of doing both but with a very definite cost if she loses.

With twist and turns, danger, a distant war, 1920 Paris and a whole lot more, twists this is a very compelling read. I particularly liked the notes in the back of the book detailing the fashions and research involved. A lovely accompaniment to the story.

But this is no novel about the fripperies of the fashion world but of the inherent dangers and double dealings of working undercover whether in fashion or on a battlefield.

In war time it is said that the normal rules don’t apply and that people act differently  – in Alix’s world there are men from the underworld like Serge Martel, owner of the Rose-Noire nightclub, and the Comte de Charembourg, a wartime comrade of her father. Each with secrets of their own and secrets that they and those around them must keep hidden at all costs.

The world of fashion might be a battlefield, but the real world is at war. The two intertwining stories provide an explosive mix.