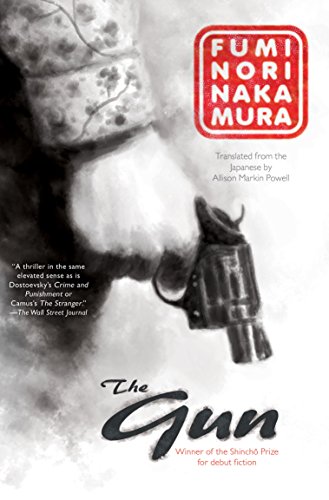 2000s: A Tokyo college student’s discovery and eventual obsession with a stolen handgun awakens something dark inside him.

On a nighttime walk along a Tokyo riverbank, a young man named Nishikawa stumbles on a dead body, beside which lies a gun. From the moment Nishikawa decides to take the gun, the world around him blurs. Knowing he possesses the weapon brings an intoxicating sense of purpose to his dull university life. But soon Nishikawa’s personal entanglements become unexpectedly complicated: he finds himself romantically involved with two women while his biological father, whom he’s never met, lies dying in a hospital. Through it all, he can’t stop thinking about the gun—and the four bullets loaded in its chamber. As he spirals into obsession, his focus is consumed by one idea: that possessing the gun is no longer enough—he must fire it.

A gun soaked tour of the city of Tokyo

The city is a maze of  strange and anoymous streets. It always seems to be raining and this is a city where guns are illegal so this takes on all sorts of different meanings to what it would if it had been set in the USA for example!

“The gun was everything to me. I was meaningless without it—I felt a savage love toward it. And yet the gun was cold to me. It drove me mad to think that the gun did not care, not even if I were consumed by that darkness. I’m not the one using the gun, I thought. The gun is using me—I was nothing more than a part of the system that activated the gun.”