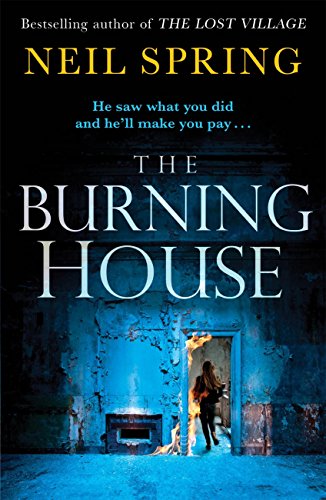 Estate Agent Clara is struggling to make a sale. With her abusive ex-husband on the brink of finding where she’s hiding, she needs to make a commission soon or lose her chance to escape.

Boleskine House on the shores of Loch Ness has remained unsold for years, and Clara is sure that an ‘innocent’ fire will force the price down. But the perfect crime soon turns into the perfect nightmare: there was a witness, a stranger in the village, and he’s not going to let Clara get away with it that easily…

Boleskine House on the banks of Loch Ness

The house and the graveyard, the waterfall and the legends are all based on true facts and if you ever get the chance to go to Loch Ness (sadly you can’t get anywhere near the site of the house) you should, in order to appreciate the setting, the sense of remoteness, claustrophobia and the feeling that when you look out on to that famous water, that you may not be alone after all…

Boleskine House really is a manor on the south-east side of Loch Ness, home of course to another legend “Nessie”.The house is famous for many reasons; in particular,  home of author and occultist Aleister Crowley. Led Zeppelin guitarist and producer Jimmy Page has also lived at the house

The area has a history of strange happenings long before Aleister Crowley moved in. There used to be  church and graveyard on the site but there were tales of someone dabbling in the dark arts having managed to raise the dead. The church one day during congregation caught fire one day and killed everyone inside. Boleskine House was later built on this very site.

Crowley purchased Boleskine House from the Fraser family in 1899. Crowley believed the location was ideal as he wanted to lock himself away from the world and dabble in his version of black magic. He believed in many things concerning spirits and believed that they needed a secluded lodge where they could congregate. Rituals were performed to invoke spirits, figures from the underworld which he would then banish to protect the land and the people in the house. However, the experiment failed as he was called away on business concerning the rituals and belief system and so the spirits he had conjured stayed in the house, and never left.

Strange events had said to have happened to Crowley and staff in the house and anyone who has had dealings with the house ever since. Legend has it that death, murder, hauntings and strange behaviours have affected subsequent inhabitants and their families.

The house still stands but it is on private land and can’t be visited. It is barely seen from the forested road side. In any case, the interior of the house was almost totally destroyed by the fire. Only someone with lots of money and a serious interest in the occult would be the only person to even consider a purchase.

I should not have read this at night. But I did. I don’t think I’ve had a book that quite made me jump and shiver in the same way as this one did. A major reading experience.

I have passed this site many many times having been to countless holidays in and around Loch Ness so was well aware of the legend and the strange goings on. The area of Loch Ness is even more stunning in real life and I don’;t think you can get a sense of the creepiness and eeeriness of the area until you’ve been there…but with this book you can. It took me back there, placed me right at the heart of Scotland’s spookiest house and left me there inthe dark!

There are shocks and scars from the start, but this is not just a ghost story but one which marries the legend of the area with black magic, a graveyard full of ghosts and a house with secrets in its charred walls. Neil really has brought the place to life and given it more and I was captivated throughout. Whatever you believe or don’t believe (and some might think certain parts are beyond the realms of even the most furtive imagination) you can’t help but be taken in with this world of legend and true fact mixed with a Spring dose of literary goodness.

I’m not going to mention the plot as there are lots of dark moments to enjoy. Yes, some of it is far-fetched, but then so too is the legend that has haunted this place for years and years. I enjoyed the way the author mixed the legend of Nessie too ( it’s not just a tourist attraction but based on real facts and many people take this very seriously) so maybe read this with a pinch of salt, but remember, most of this is based on what is already believed.

Very clever and entertaining. Perfect for the long winter nights. In fact I would recommend this on the kindle as the paperback isn’t out until March 2019 anyway and the back light on the kindle paperwhite takes this reading experience to another place…