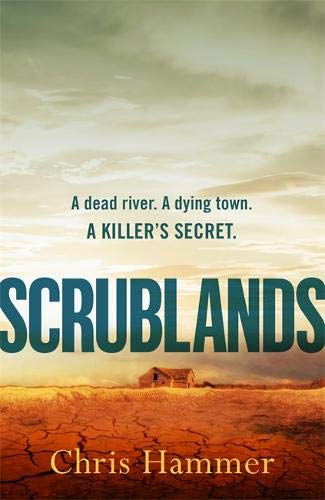 In an isolated country town ravaged by drought, a charismatic young priest opens fire on his congregation, killing five men before being shot dead himself.

A year later, journalist Martin Scarsden arrives in Riversend to write a feature on the anniversary of the tragedy. But the stories he hears from the locals don’t fit with the accepted version of events.

Just as Martin believes he is making headway, a shocking discovery rocks the town. The bodies of two backpackers – missing since the time of the massacre – are found in the scrublands. The media descends on Riversend and Martin is the one in the spotlight.

Wrestling with his own demons, Martin finds himself risking everything to uncover a truth that becomes more complex with every twist. But there are powerful forces determined to stop him, and he has no idea how far they will go to make sure the town’s secrets stay buried. 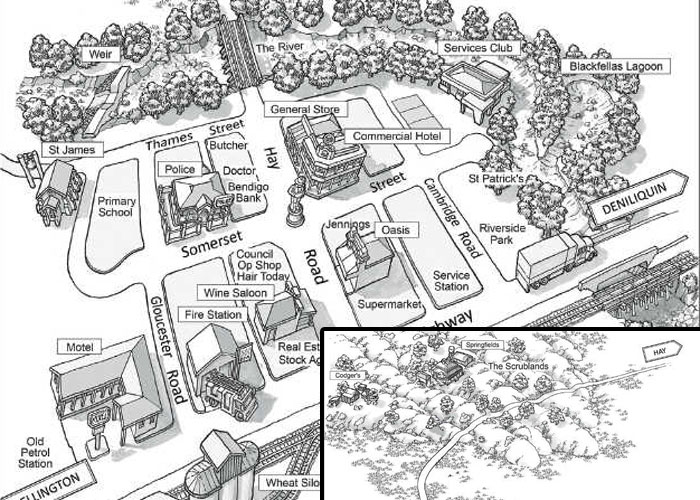 Fictional Riversend map from the novel

The author explains how his setting is fictional in name but inspired by a very real experience:

The setting for Scrublands emerged from my travel in the summer of 2008- 12009 at the height of the millennium drought, as I researched my non -fiction book, The River. However the towns of Riversend and Bellington are entirely fictitious, as are their inhabitants. Riversend borrows bits and pieces from various country towns but comes mostly from the imagination.

The setting is however very real and raw and comes across loud and clear in the book.The sand and heat come off the pages.

“The early start, the long drive and the heat have drained him, leaving him feeling hazy”

“Nothing moves , except the shimmering heat haze rising from the street. The temperature must have hit forty without a breath of wind.”

This is a town where the church is the scene of the crime:

He stands before the church as the sun lifts from the horizon and send shafts of golden light through the branches of the river red gums.

The church seems jaded, a shadow of what it once was…

…red brick and corrugated iron roof, raised ever so slightly above the surrounding ground, half a dozen steps leading up to a utilitarian oblong of a building…”

“The town in general. What a place this is! Not a kind of place you’d like to go and not one you would stay for long. In  fact it’s very much like a ghost town. People have left for better lives, the families devastated by the shootings are trying to survive but they are shadows of their former selves. The only hotel, barely a rest stop is called The Black Dog and the pass word for the wifi when it decides to  work is “billabong”

.”There’s an old bookshop which sells reasonable coffee. A bar of sorts where the drifters hang out after being refused from larger bars elsewhere. A shop selling bottled water and other provisions, when it’s open that is. And an op shop (charity shop) where the donated goods are as tired and faded as the inhabitants themselves.” 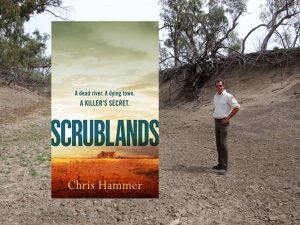 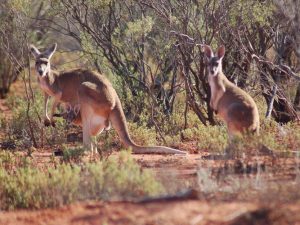 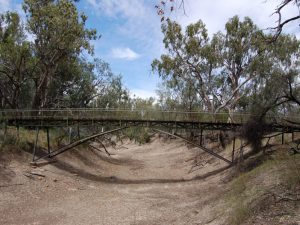 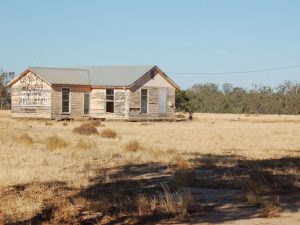 There’s something about novels set in the outback that makes them so compelling, but this novel takes it to new heights. This is a world of ghostly memories and buried secrets. The landscape is evoked with style from the start and it shimmers in the Australian heat throughout.

Read more on the blog