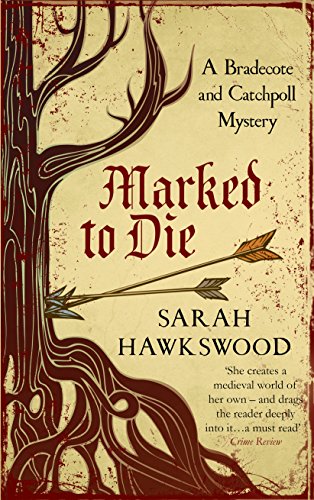 1143: It’s not easy catching a killer in the Worcester woods…

A mysterious archer melts back into the forest leaving a pile of corpses in his wake. The lord Sheriff of Worcester cannot ignore such a brazen attack on the salt road from Wich, nor the death of a nobleman in the wrong place at the wrong time. And so Hugh Bradecote and Serjeant Catchpoll are dispatched to hunt an elusive killer and his gang and put a stop to the mounting attacks. But it is not easy to get the culprits in their sights with a reeve keen to keep his position at all costs, a lord with his own ends to serve and a distrusting and vengeful widow to whom Bradecote is increasingly attracted.

For your trail, the obvious starting point is in Worcester, just south of the cathedral,, because where the King’s School is now is where the castle stood, and just outside is where Serjeant Catchpoll lived, though you would need strong imagination now. It is where the news of the first deaths is brought and sets Bradecote & Catchpoll off on the hunt. Only the street plan is largely as it was in 1143, in secular terms, but of course the cathedral still dominates as it did then.

Cookhill is near the Warwickshire border, and a little south of the Salt Way the heads from Droitwich towards Alcester and on to Stratford on Avon. It is where Bradecote, Catchpoll and serjeanting apprentice Walkelin are based during the hunt for the killer, and where he meets Christina, made a widow during the first salt theft. It is very pretty countryside, and also a windy ridge.

The ruins of Bordesley Abbey, which Bradecote & Catchpoll visit, and whose salt is stolen, does not have much standing to a great height, but what is there is worth a visit as part of a day trogging about.

Droitwich Tourist Information Centre has a permanent exhibition on the history of making salt from the brine pits right back to the Roman period, and shows how highly the Wich Salt was regarded.

The River Severn at Holt , where the road drops steeply, crosses a bridge these days, and rises steeply on the far side. There is a typical 1930s ‘road pub’ with a good view, and it does lunches! It is in Holt that Bradecote and Catchpoll, find one of the stolen cartloads of Salt.

I am excited and a little bit sad reading this book. It was really good but there’s another two in the series before it which I’ve missed. How did I miss them? This is a good one – Bradecote and Catchpoll are already my friends and as soon as I’ve finished this review, I’m off to read the other two. (as well as writing rhyming poetry apparently)
I do love historical fiction and always hope it’s going to have great characters as well as great scene setting using all of the five senses. Of course this book does in spades. The medieval environment is carefully crafted that it made me think f the Yorvik viking Centre as I was reading – if you’ve not been there, it’s a medieval model of a life size Yorkshire town with models which stink and roads covered in mud and animal dirt as they would have done back in those times. It’s very authentic and this book puts that on the page. (No scratch and sniff luckily)
There’s a great  mystery and great lead characters here ( I particularly liked the mysterious archer). There’s a lot of careful research and love and attention gone into this book and I will certainly be reading books one and two. And the ones to come in the future. Otherwise I will request that a pigeon take a message to the author stating that I request forthwith a new installment to the historical adventures.I doft my cap to you Ms Hawkswood –   a fair and funny plot with a unique band of characters and an illuminating view into life of another time . Welcome to a  world of medieval mystery!