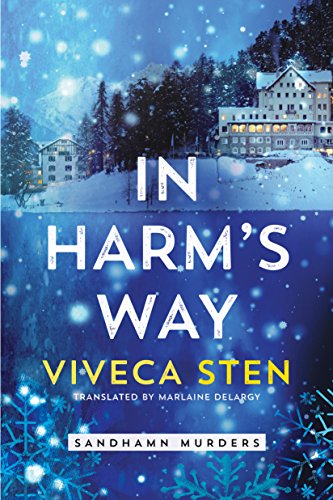 2000s: Back to Sandhamn at Christmas, but things are far from festive…

The body of world-famous journalist Jeanette Thiels is discovered the day after Christmas, frozen in a snow-covered garden just steps from her hotel on Sandhamn Island. Detective Thomas Andreasson finds it highly unlikely that it was some bizarre accident. After all, the relentless war-zone correspondent was no stranger to conflict and controversy—both professional and, of late, very personal. Who would want to see her dead is another story.

Enlisting the help of attorney Nora Linde, his longtime friend on holiday, Thomas is anxious for the answers. But he and Nora don’t have to look far. The clues are leading them closer to home than they imagined. Jeanette may have made a career out of exposing corruption at the highest levels of world power, but she was also a woman with secrets of her own, and they’re coming to light on Sandhamn. For Thomas and Nora, unearthing the deeply rooted deceptions behind Jeanette’s death could now put those closest to her in harm’s way, too.

The body of Jeannette Thiels is discovered on  Sandhamn island where she was staying in the famous Sailors Hotel. The author points out that although it’s a lovely place to stay, in reality, it’s not open at Christmas and normally only takes guests over the New Year period. Would still make for a great holiday though!

What is must be like to arrive in Sweden as an immigrant is detailed as well  with a character in Stockholm. The wider themes of immigration and war crimes, with Jeanette’s work at the forefront, are explained as are the themes of corruption. Enemies are both in plain sight and hidden on these islands it would seem.

The island of Sandhamn is still centre stage but now the setting opens up and takes us to a few more islands and ferry terminals. The police navigating these waterways helps to visualise and appreciate the landscape here..

Jeanette Thiels is a world-famous journalist and she spends her time traveling to all corners of the world researching on corruption. She suddenly gets a phonecall and rushes to Sandhamn island but feels unwell. Booking herself into a hotel, she feels worse, realises she seems to have lost her laptop somewhere and starts to panic. On her way to dinner, she heads out but the storm gets worse and she collapses. No one is there to help…..

That’s just the start of things. An investigation into her death is carried out and the net stretches wide, to neighbouring islands, Stockholm and all over. The police have a right job on their hands. Thomas the policeman goes from one island to another in the search for answers and this I found very interesting as the boat access to the islands and the choppy waters make for a very unique view on these communities and the secrets which may hide within.

I also loved the winter and Christmas setting. Lots of lovely mentions of Swedish Christmas treats such as Lucia and the church services, the snow blanketing everything ….but then comes the cold and the murder and you can feel it seeping through your own bones in the end as you read.

A major part of the book looks at the theme of immigration and the rise of the far right. There are far reaching consequences here and lots to consider about how things are today….all linked to one journalist’s death.As the net got tighter, the action and pace really ramped up.

I do enjoy these Swedish crime novels set in the archipelago. Some very relevant themes in this book (no spoilers here) and one medical related thread I found VERY interesting and unique