If You Could Go Anywhere 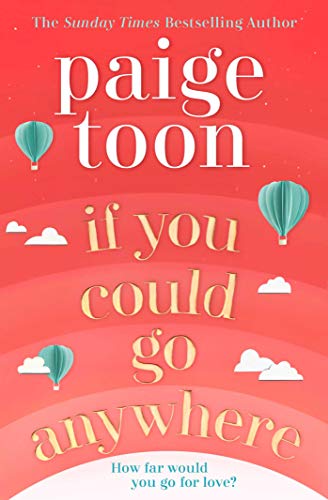 Angie has always wanted to travel. But at twenty-seven, she has barely stepped outside the small mining town where she was born. Instead, she discovers the world through stories told to her by passing travellers, dreaming that one day she’ll see it all for herself.

When her grandmother passes away, leaving Angie with no remaining family, she is ready to start her own adventures. Then she finds a letter revealing the address of the father she never knew, and realises instantly where her journey must begin: Italy.

As Angie sets out to find the truth – about her family, her past and who she really is – will mysterious and reckless Italian Alessandro help guide the way?

Travel BookTrail style from Australian desert, across Italy to Norway and beyond with Paige Toon

The first landscape could not be more different to what follows. This is the very remote landscape where Angie lives before finding out the secrets which will rock her life. The area is one of desert – so much desert that apparently it was used as the setting of a planet Luke Skywalker in the Star Wars films lives on. It’s also called “Fred Flinstone country’ by Angie as many people live in ‘huts’ or dug outs  – homes carved in to the land. IT’s a fascinating landscape to see and experience through Angie’s eyes and it’s a very unique place.

The main Italian setting is Rome and the pizza restaurant (ficitonal but you never know). Alesandro takes Angie on a tour of the city, to the Colliseum, the parks, the alleyways and the Pantheon to name but a few. There’s lots of discoveries such as visiting St Peter’s Square and Castel Sant’ Angelo ‘ as in the Dan Brown novel” – Brilliant when fictional characters refer to other books! Angie discovers the city at the same time as her family which is  a nice touch.

“Nothing prepares me for the terraced hillside Italian Renaissance Gardens of Villa D’Este. Famous for its profusion of fountains, I’ve never been in a more enchanting , fantastical place. The Aniene, the river that runs along the bottom of the Marchesi property, was diverted to furnish water for the complex system of pools, water jets, channels, fountains, cascades and water games. Sunshine streams through trees, sparkling on water an bounding off spray from fountains.

There’s a visit here and a short history tour. “It is absolutely mind blowing to see so much history in every direction.” someone says. How very true! “There are mosaics on floors, fountains and statues, paintings on walls and even clay pots lining the walls of taverns.”

Another great stop off in the Italian Tour! This time they head to a hotel in the Sant Croce region and it’s just west of the historic centre. “The outskirts are ideal for travellers on a smaller budget and compared to the flashier central hotels, it’s not expensive – only around 50 euros a night.”

Bridge of Sighs – The bridge connect to the interrogation room in Palazzo Ducale, Convicts would be allowed one last view of Venice before their imprisonment.”

Palazzo Ducale “One of the most ornate buildings I’ve ever seen.”

Then it’s off to Bologna and Florence where they visit the famous church Santa Maria del Fiore   and we’re told it s the third largest church in the world behind St Peter’s in Rome and St Paul’s  in London. The walk over the famous Ponte Vecchio is described in exquisite detail.

There are two main locations here but the most interesting one is the so called Troll wall. One of the characters has already spoken of wild atctivities and taking yourself out of your comfort zone. Well this would be the place to do it!

BookTrail Boarding Pass: If You Could Go Anywhere