Harry Potter and the Chamber of Secrets (book 2) 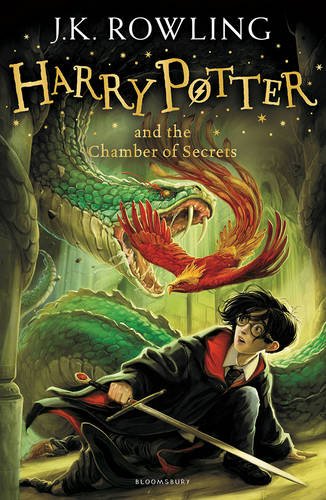 Timeless: Harry Potter has survived the summer and is now back at Hogwarts School of Witchcraft and Wizardry.

After surviving his first year at Hogwarts School of Witchcraft and Wizardry, Harry is pleased. It’s been a tricky year and a very strange one at that! Now  he’s just had the pleasure of his first summer back home with the awful Dursleys where he was visited by a friendly but odd looking house elf by the name of Dobby.

He’s dying to get back to school to see his best friends and to learn more magic, not to mention more about his wizarding past. He almost doesn’t get there though when he misses the Hogwarts Express so ends up getting there in a flying car!

Back at school, Harry realises that this second year is going to be just as eventful as the first as there is  a Chamber of Secrets in the school that Harry is about to discover.

Hogwarts that magical place of wizardry and magic is the main setting of the second novel but the way in which Harry arrives there, when he almost crashes into the the walls of Alnwick Castle, in Northumberland has to be one of the best entrances to the castle we’ve ever seen. Tourists have to come via a more sedate route but it’s just as magical once inside.  This is also where the Weasleys’ flying car crashes into the Whomping Willow.

In The Sorcerer’s Stone, Harry walks with his white owl, Hedwig, through a snowy cloister courtyard located in Durham’s Cathedral. Visiting here is really like stepping into Hogwarts – the mood, the atmosphere and just knowing that you may bump into Hedwig or even Harry is magical in itself..

The North East is a great place to discover some of the Harry Potter magic since so many of the scenes were filmed here in Durham and Alnwick. The Bookshop and the Alnwick Gardens may not be in the film but they share the essence and magic of the book in so many ways. It’s the major stop up the country and not far from the Scottish Highlands where the Hogwarts Express is on its way.

Into the land of Hogwarts for book three…