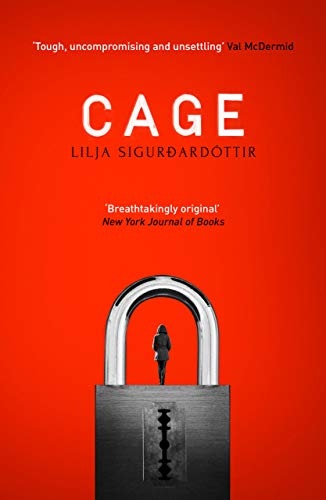 2000s: The third part to the Reykjavík Noir trilogy…

The prison doors slam shut behind Agla, when her sentence ends, but her lover Sonja is not there to meet her.

As a group of foreign businessmen tries to draw Agla into an ingenious fraud that stretches from Iceland around the world, Agla and her former nemesis, María find the stakes being raised at a terrifying speed.

Ruthless drug baron Ingimar will stop at nothing to protect his empire, but he has no idea about the powder keg he is sitting on in his own home.
At the same time, a deadly threat to Sonya and her family brings her from London back to Iceland, where she needs to settle scores with longstanding adversaries if she wants to stay alive.

With a shocking crescendo, the lives of these characters collide, as drugs, smuggling, big money and political intrigue rally with love, passion, murder and betrayal until the winner takes all

Cage is largely set in and around Iceland and Reykjavík. Locations are references and backgrounds to the fast past story unraveling around you. The Holmsheida prison and the airport are major locations where characters either are locked up or passing through on their way to their next ‘job. These two places are used fictitiously of course.

Iceland is evoked with style and gritty, raw emotion. It’s cold, vast, and empty. Characters live across the country and there’s a lot of coming and going, travelling to one home to see someone connected or not to the case at hand. Reykjavik is the site for Radio Edda which Anton listens to and which becomes part of the story itself later on.

This is a novel about the unsettling undercurrent of mistrust against immigration, about the drugs trade, the right of wrongs and loyalty. It all takes place in a small country, where the weather and isolation are king.

There are a few USA locations when the subject of the aluminium plants is investigated. The plants are located in Ohio, Fort Wayne and Morgantown West Virginia but the settings are vague and hardly mentioned.

That was quite the ending to the Trilogy! A story which not only ends with a bang but which will reverberate in your ears for some time to come.

Constantly changing POVS, Agla’s fight to find out the truth, a journalist’s search for the truth about the aluminum and metal plants in both Iceland and the USA, international conspiracies, a boy with a misguided goal – living under the shadow of immigration. That’s before the drugs baron and those under him come into play!

Very clever to see the different characters and their individual stories combine, bit by bit to a shocking conclusion. Agla leaves the cage of prison for another state of entrapment altogether. And where on earth was ex Sonja who she hoped would be there to meet her?

For a relatively short novel, there’s a whole lot of Icelandic intrigue packed in! Get the other two installments and read in order for maximum effect.