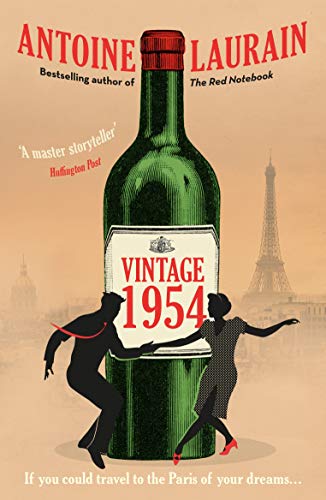 When Hubert Larnaudie invites some fellow residents of his Parisian apartment building to drink an exceptional bottle of 1954 Beaujolais, he has no idea of its special properties.

The following morning, Hubert finds himself waking up in 1950s Paris, as do antique restorer Magalie, mixologist Julien, and Airbnb tenant Bob from Milwaukee, who’s on his first trip to Europe. After their initial shock, the city of Edith Piaf and An American in Paris begins to work its charm on them. The four delight in getting to know the French capital during this iconic period, whilst also playing with the possibilities that time travel allows.

But, ultimately, they need to work out how to get back to 2017, and time is of the essence.

” As the years had gone by, the French capital had taken on mythical status. Montmartre, the Eiffel Tower, Notre Dame, the bridges of the Seine, Place de la Concorde, the Louvre, cafe terraces, the Opera and other well-known landmarks seemed to belong to an enchanted city that would be forever out of their reach.”

” I’d have loved to see Les Halles back when it was  real marketplace, with Baltard’s glass halls filled with butchers and greengrocers”

AS Bob  climbed up the steep roads of Montmartre, he decided that Paris was exactly as he had imagined. He had got up this morning and had breakfast out on the terrace, and the sun had even shone. Yes, it really was Sacre-Coeur peeking out beyond the zinc roofs and cooked two eggs from the box Madame Renard had left for him.”

The bar where they go and realise it looks very familiar…

Imagine going here like in the novel and seeing it without the famous glass pyramid infront of it? That wasn’t built for another 30 years.