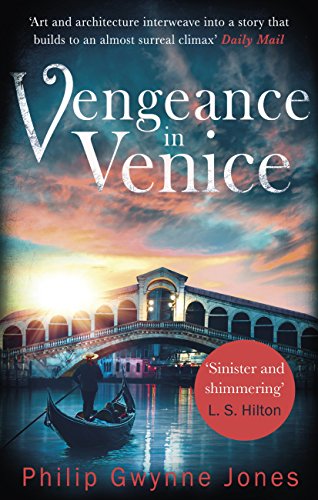 An invitation to an exclusive event during the Venetian Biennale gives Honorary Consul Nathan Sutherland the perfect chance to drink prosecco in the sunshine and meet some of the greats of the art world.

And then a world-famous critic is decapitated by one of the installations in the British Pavilion. A terrible accident, it seems, until a postcard is discovered in the victim’s pocket: an image of Judith beheading Holofernes.

But this is not just a one-off. Before long, three more postcards have been sent out with deadly results. As the bodies pile up, Nathan finds himself getting closer and closer to the truth, but when he himself receives an image of Death bearing a scythe, it becomes a race against time to save his own life . .

The city of creativity and culture as well as canals just got a third C added to that list – crime. This is  a city where crime lies between the oil paintings and musical offerings and Philip

The author clearly knows the Italian well – he lives right in the heart of it, so picks up the nuances, the views of an outsider looking in and the view of a man who has now made this city his home. Quite a unique insight and the perfect literary guide!

This book makes it easy to get transported to the location. There are some lovely mentions and ‘scenes’ in the city of canals where the sun shimmers on the water, the tourists criss-cross the piazzas and bridges and the bars on the terraces are the focal point of many people’s lives.

One interesting place in particular and the focus of the story is the British Pavilion of the Venice Bienal. The festival takes place here…as does the crime. Established in 1895, La Biennale di Venezia is the longest-running international art biennial and one of the most prestigious cultural institutions in the world.

A) Venice - British Pavilion of the Venice Bienal

B) Venice - Street of the Assassins