The Stray Cats of Homs 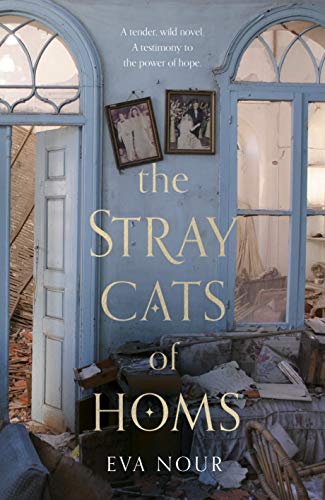 2000s: Inspired by a true story of a man determined to keep hope alive

‘A cat has seven souls in Arabic. In English cats have nine lives. You probably have both nine lives and seven souls, because otherwise I don’t know how you’ve made it this far.’

Sami’s childhood is much like any other – an innocent blend of family and school, of friends and relations and pets (including stray cats and dogs, and the turtle he keeps on the roof).

But growing up in one of the largest cities in Syria, with his country at war with itself, means that nothing is really normal. And Sami’s hopes for a better future are ripped away when he is conscripted into the military and forced to train as a map maker.

Sami may be shielded from the worst horrors of the war, but it will still be impossible to avoid his own nightmare…

BookTrail your experience of Homs, Syria

Be sure to read the author note having read this remarkable story as it really helps you to realise just what the truth is behind it and the depth of what you have just learned. Sami’s story she says gives frightening insight into tone of the world’s harshest dictatorships. All major events in the book are real and are seen through Sami’s eyes. There are some fictional characters and events of course but these just lead to a great understand of what the reality must have been like. The author and Sami’s names are fictional too. Their story is remarkable – wait till you hear where they are now.

“In that corner was Sami’s hometown, Homs, which gave its name to the province. Looking more closely at the blue thread – the Orontes river – it divided the city in two. To the east was the centre and the most important neighbourhoods, and to the west, the new and modern Al-Waer suburb.”

“Yes, both the country and the city resembled the quilt Samira held in her hands:an incongruous collection of pieces, which she patiently sewed together with equal parts frustration and love.”

“Homs was the country’s third biggest city and hone to about a million inhabitants, situated on the river banks near the Crusader castle Krak de Chevaliers. There was the old clock tower, the Saint Mary Church of the Holy Girdle and the Khalid ibn al-Walid Mosque, the but they didn’t attract as many tourists as the capital Damascus or the commercial centre Aleppo.”

The BookTrail’s reivew of The Stray Cats of Homs