The Rise and Fall of the Miraculous Vespas 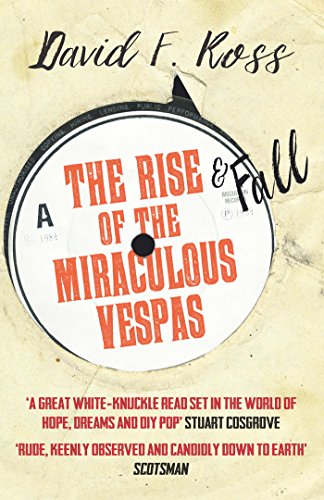 1980s: The search for pop immortality in 1980s Kilmarnock

Just how does a band go about looking for pop immortality? That’s what a band from Ayrshire in Scotland is hoping to achieve as they’ve had huge success with their smash hit record and it’s 1984 – the year they hope that will be their year of international fame and fortune.

The band, well a bunch of social misfits, who all featured in the novel The Last Days of Disco are back and the volume has been cranked up with their chase for fame. But there’s the debt they’ve accrued in the meantime, their rather dubious boss and small town Scottish rivalries to contend with first.

This follows of from The Last Days of Disco which sets the scene and prepares the stage for the show. This is the second act of that show and the audience seems more rowdy, taking in an even stronger Scottish dialect, swearing more and taking more drugs. Just so you know.

These young band members are young boys hellbent on making the big time. They work their socks off – one gig after another, a series of one dreary pub or club to the next. In the days before social media, their efforts to make connections, to search for their next big break is fraught with blood, sweat and tears. Their passion and struggles are heartfelt and set against a record soundtrack of The Smiths, The Clash plus many more TOTP  favourites and of course it’s on all vinyl.

The list of characters along with their names and rather ‘unique vernacular are what sings from the song sheet that is this book – Wullie Blair aka ‘The Painter, Hobnail, Washer Wishart. Oh and the memories from ‘ the pictures aren’t the same without the Revels” to the time one of them wears a kilt of sorts to a football match and which is described as “His find was less kilt, more tartan blanket with big belt holding it up.”

The days of Train Spotting, Scottish banter in the music world at its best.

This book messes with your head. I mean I’ve not stopped humming many an 80’s tune since reading it. Granted I did play the record that came with the review copy, but the music from the words on the page is more than catchy. The swearing and cursing are back with a vengeance an whilst this won’t suit everyone – it fits the time and place and the attitude of a young band at the time.

The Scottish banter, vernacular and general Scottish setting make this story both unique and a right bloody laugh. Honest, raw and brutal in equal measure. It’s a fast and furious ride into the music world, the highs and the lows and all those grey areas in between. This was a great sequel to those disco days and there’s a third in the series which I can’t wait for.

It’s just so much fun this book – although there’s a serious overtone to it too – this book is a raucous ride back through the eighties on the back of a Vespa with the music blaring out and the wind in your hair. Well, this is how it made me feel although some of the redness in my cheeks was due to the very colouful language in some very unexpected places! It’s a journey in every way from the very first page until the end when you close the book and the hum of that vespa driving off into the distance.