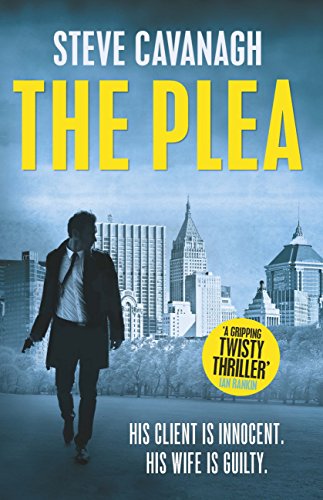 2000s: There is a noose around someone’s neck and it will take one giant plea to release the pressure…

Eddie Flynn is a recovering alcoholic who used to be a con artist but is now a lawyer. He’s also recovering from the fact that in book one The Defence, he had to fight to save his daughter from the head of the Russian mafia. This time it’s his estranged wife who’s in danger. She works at a law firm Harland and Sinton and one of their client’s David Child, IT supremo,  has been accused of killing his girlfriend. He’s a well known billionaire and so there is a lot of talk and scandal.

The law firm however is not exactly innocent – currently embroiled in financial scandal galore using technology from David Child himself. To complicate matters further, the CIA on on to Eddie as they need him to get Child on side and allow THEM to get the law firm made accountable.

The noose is tightening around so many necks that Edie has to pull the strings with every muscle in his body. Let’s just hope it’s enough to stop everyone hanging.. out to dry or otherwise.

West  46th Street – Where Edie has his law office. “The mahogany front door to the four-storey sandstone building that houses five offices, including my one -man law practice, looked like any other at this end of West Forty-Sixth Street. The area was a mix of bars, noodle houses, high class restaurants, accountants’ practices and private media consulting rooms, with each set of offices becoming classier the closer you got to Broadway”

Upper East Side  – Judge Harry Ford lives in an apartment here. Maybe on Park Avenue as this goes right through the neighbourhood. A short walk to the lovely Central Park too if Harry’s not at home

Central Park West – “Being a relatively new billionaire, Child owned an apartment in Central Park Eleven the most expensive apartment building in the US. The building actually sat on Central Park West but they’d decided to christen the place Central PArk Eleven. His apartment spread over more square footage than a basket ball court and enjoyed a wife, wrap-around balcony with the best parks in Manhattan.

Booktrailing can be thirsty work so why not head down to a pub which is kind of featured in the novel –  “Finnegan’s pub on fifty- sixth street looked more like a flophouse for the blind than a public bar” There is a Finnegan’s Wake pub but it’s in 1st Avenue and this is by far the superior establishment!