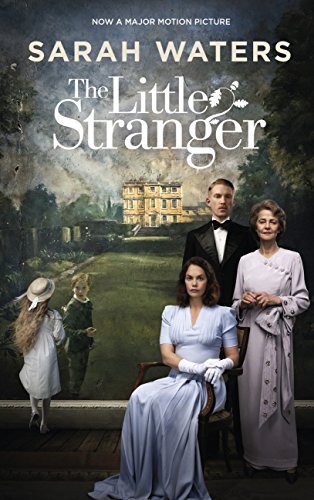 1940s: Are you prepared for what you will find at Hundreds Hall?

In a dusty post-war summer in rural Warwickshire, a doctor is called to a patient at lonely Hundreds Hall. Home to the Ayres family for over two centuries, the Georgian house, once grand and handsome, is now in decline, its masonry crumbling, its gardens choked with weeds, its owners – mother, son and daughter – struggling to keep pace. But are the Ayreses haunted by something more sinister than a dying way of life? Little does Dr Faraday know how closely, and how terrifyingly, their story is about to become entwined with his.

Hundreds Hall in the novel is fictional and when you read about it. you’re immediately grateful that it is – especially by the end of it! It has to be one of the creepiest houses in fiction. It used to be grand and sumptuous, the envy of the area. A house where the young Faraday attends for a summer fayre and immediately feels impressed and fascinated by it. He steals an ornate acorn from the wooden panelled walls by chipping it off with his penknife. This is the start of the desecration of the house for when he returns 30 years later as the family doctor, the house, as those living in it, seem to be dying.

The house certainly is:

“Hundreds Hall withdrew even further from the world. The gates of the park were kept almost permanently closed. The solid brown stone boundary wall, though not especially hight, was enough to seem forbidding. And for all that, the house was such a grand one, there was no spot, on any of the lanes in that part of Warwickshire, from which it could be glimpsed”

When he sees it again:

“My heart began to sink almost the moment I let myself into the park. I remembered a long approach to the house through neat rhododendron and laurel, but the park was now so over-grown and untended, my small car had to fight its way down the drive. When I broke free of the bushes at last and found myself on a sweep of lumpy grave with the Hall directly in front of me, I put on the brake and gaped in dismay.”

There’s creaky floorboards, voices that are heard in empty rooms, bells for servants which ring for no reason, doors that shut and lock by themselves and a family at the centre of it, determined never to leave this crumbling place, this dying home. There’s something that is not right here. Death, suicide and war trauma as well as something evil has permeated these walls…

So, if Hundreds Hall is fictional, where might it be and where can you go to pretend it is?

Home of the Newdigate family for over 4 centuries

Famous British designers have worked on this house.

The Baroque Great Hall of Ragley is impressive

A lot of parkland surrounds the house

A manor of built of brick, stone, and half-timber

Dates back to the 13th century

Home of the Throckmorton family since 1409

The Throckmorton family was involved in the Gunpowder Plot of 1605

I feel brave to have read this. I love a novel about a crumbling country mansion where the outside is creeping inside, where  the walls are crumbling around those living there, a house with a presence, ooh and a dark secret at its core.

This book has all those and more. The creep factor is there from day one as a doctor heads to the house having first visited as a young boy. He was astounded them but fearful of the decay since. From the opening chapter, strange things begin to happen. The family although damaged and virytutally penniless are determined to stay on, cling on to the house. Roderick, the man of the house, hears strange voices and sees things move. He’s a war veteran but is his mind addled by something much worse.

The doctor soon gets involved by visiting the house, caring about those inside and wondering like everyone else who will inherit once the family are gone. They are old, damaged unmarried – only one woman of marriageable age remains

I admit I didn’t get the ending at all. Apparently there isn’t one. Well, it’s open to interpretation according to other reviews and sources I’ve since read. But I have my own thoughts and I’m still creeped out. The writing was evocative and the house very creepily whispers from every page. I read this on a windy day with the rustling of the leaves and the whistles through the trees. Better than Dolby surround sound!

Atmospheric although I hope there’s a cinema who lets you watch the film version of this with the lights on!