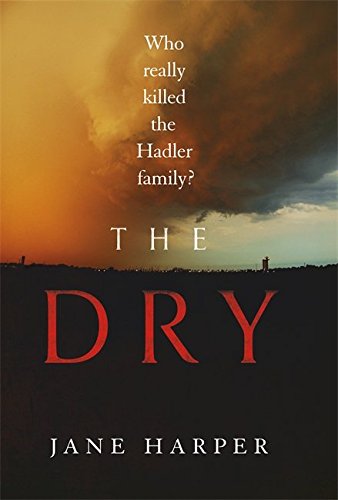 The worst drought to ravage Australia in a century is currently afflicting the small town of Kiewarra. It hasn’t rained here for over two years. Two years of drought, failed crops, dryness and a sense of despair has ravaged the ground and the people who live on this landscape.

Such a small community might be expected to band together but not this one – for in their midst, three members of the Hadler family have been brutally murdered. Everyone thinks Luke Hadler, the father, killed his wife and six-year-old son. His body was found away from the crime scene – and ruled as suicide?

Policeman Aaron Falk returns to the town of his youth for the funeral of his childhood best friend, and is unwillingly drawn into the investigation. Falk is forced to confront the community that rejected him twenty years earlier. Because Falk and Luke Hadler shared a secret, one which Luke’s death threatens to unearth.

The town of Kiewerra is fictional but is heavily based on the drought-stricken community of regional Victoria, Australia, about five hours from Melbourne.

The author explains that the town itself is an amalgamation of many rural communities she visited while working as a journalist in Australia and the UK. While none of those places were anywhere near as dysfunctional as Kiewarra, they helped her get a sense of what it is like for people so reliant on things they cannot control, such as the land and the weather.

“Shade is  a fleeting community”

It’s a small community but not a close-knitted one by any means. “An eerie nothingness” People have known each other here for years, if not for most of their lives, having grown up with one another. One man returns to a place which he escaped from to be faced with the past in a community which doesn’t welcome him with open arms. The people who live here are mistrusting, wanting to keep to themselves and finding problems with their neighbours. Their land is their home, they are fiercely protective of it and know it like the back of their hand.

“The river is a dusty scar on the land”

And the land – so dry and dusty – it is dying and decaying before their very eyes. So too are those who live here through the lack of hope and opportunity and when an entire family is slaughtered, evil rises from that dry ground and stakes its claim on their land. This is a landscape in the final throes of death, a choking claustrophobic place to be with the power to burn into your conscience and memory. With those flies who live off the heat of dying flesh, buzzing around your ears as you read. And the cries of the huntsmen! chilling!! You will hear them for a long time to come….

Never have I felt so chilled and so clammy as I did reading this book – that first chapter will stay with me for some time as it was so immediately vivid and evocative, I could see, hear, smell, taste my surroundings. I even started to itch with those flies! As the landscape opened up and the story unfurled, it was slowly memerising like a piece of plastic thrown on to a fire, it fizzed, twisted into one shape and then took on another, hissing all the while with mystery and intrigue. This was good. Hauntingly good.

The landscape created and nestled the story in its dark heart. I could see each and every dusty street, feel the anger of the landowners  -some were only fleeting characters but as richly drawn as the main ones. There were two sides to this claustrophobic and isolation – both the town itself and that of Falk who returns to the town. Everyone was a stranger to each other in the end but the roots of the past ran deep  – I could liken the book to a tree which sits alone in the outback, dying but with the twisted and tangled roots below slowly strangling it  – that’s if the heat doesn’t kill it first.

Such a dark and brooding book, very well paced with a gripping conclusion. The tension was up and down to catch you off guard and it had a kind of mesmering feel to it all – a heat wave of emotions that gripped from the start. A great early read of the year and one that’s definitely going on my best of 2017 list!