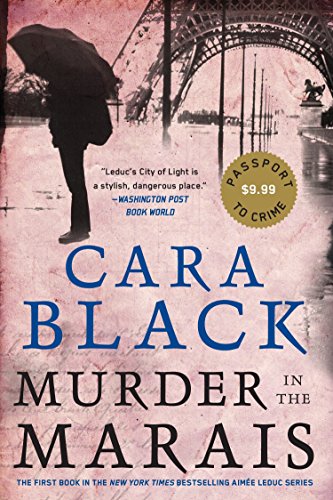 1990s: Detective Aimee Leduc makes her debut in the first in a series of mysteries

Aimée Leduc, a Parisian private investigator, has always sworn she would stick to tech investigation – no criminal cases for her. Especially since her father, the late police detective, was killed in the line of duty. But when an old Jewish man approaches Aimée with a top-secret decoding job on behalf of a woman in his synagogue, Aimée unwittingly takes on more than she was expecting.

When she goes to drop off her findings at her client’s house in the Marais, Paris’s historic Jewish quarter, she finds the old woman strangled, a swastika carved on her forehead. With the help of her partner, René, Aimée sets out to solve this horrendous crime, but finds herself in an increasingly dangerous web of ancient secrets and buried war crimes.

Travel to the Marais district in Paris with Aimee Leduc

Once the city’s Jewish quarter, this is the area depicted in the mystery novel.

Rue des Rosiers is at the centre of the Jewish quarter and is lined with Jewish food shops, bakeries and other Jewish stores. One of the most interesting buildings is the Hammam Sauna Saint-Paul at no.4.

The fashionable Marais district in the 4th arrondissement, also known as SoMa (South Marais), is filled with hip boutiques, galleries, and gay bars. The grassy Place des Vosges is home to elegant arcades and the Musée Victor Hugo, where the writer lived.