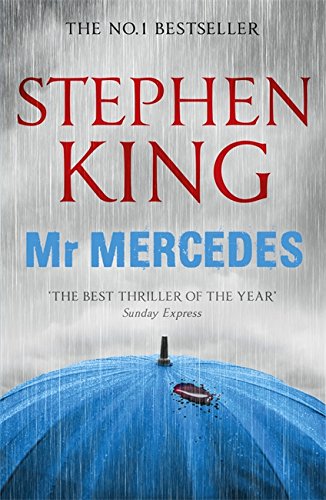 2000s: You know you’re in for one heck of a ride when Stephen King is in the driving seat..

The so called Mercedes massacre has tormented retired cop Bill Hedges as it was the case he never solved. The man at the centre of that crime –

The massacre was exactly that – a cold hearted killing of 8 people who in a queue when Brady drove his mercedes car straight at them. He’s planning another, equally bad crime and is corresponding with the very man who missed him the first time.

This time, it’s a game of cat and mouse at the highest order.

The claustrophobic and twisted mind of a sadistic killer is the setting for this novel and an insight into the horror that one person is willing to inflict on another.

The cat and mouse element to the scene – along the roads and backwaters of the American midwest. The journey King takes us one is full of twists and turns but it’s the linear plot and linear journey that is relatively simple which really adds to the overall horror of the story unfolding.

Cat and mouse between a retired cop and a weirdo with a car. Bill Hodges is a strange character as well. He’s had a tough life and takes it upon himself to catch the one who got away. He’s never forgiven himself and his retirement only serves to remind him of what he never achieved, the job never finished.

There’s a small cast of characters in this small town – most notable is Jerome Robinson -17, black,tall , and a computer whiz and the closest thing the old guy has to a friend.

Regrets from the past, and a cat and mouse game in the present. All in the remote and unnamed American midwest.