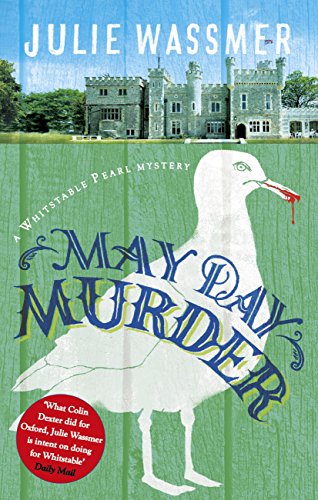 2000s: It’s springtime and Whitstable is emerging from hibernation.

While neither the restaurant nor detective agency is too busy, Pearl resolves to spend some time at the family allotment. But her best friend, Nathan, has persuaded one of his favourite actresses to open the May Day festivities at Whitstable Castle and involves Pearl in his plans.

Like Pearl, Faye Marlowe is a Whitstable native, but having left the town more than two decades ago, the star has been living in the South of France. Now she arrives with a small entourage and causes a stir but Pearl’s mother Dolly remains unimpressed as Faye Marlow used to be plain old Frankie Murray, the daughter of a local whelk merchant.

Nathan soon realises he has made a mistake with this invitation and when Faye’s body is found  tethered to the maypole on the Castle grounds . . . it becomes a bigger and more deadlier mistake too

The  mood of the little North Kent Fishing town seemed always to be determined by the weather. During the winter months Whitstable entered a period of hibernation when the shops and eateries were largely free from a veritable tsunami DFLs (the town’s acronym for Down from Londoners) who flooded the at throughout the summer, especially during the annual Oyster Festival in July

Spring was a time of reawakening and the first hint of blossom signaled a burst of activity during which shopfront and beach huts where hastily repainted ,and front gardens and window boxes were weeded and newly planted

“As they passed the west entrance of the Castle, the old flint and brick gatehouse looked at odds with a new sign that touted space for hire for weddings, functions and conferences – and Pearl couldn’t help wandering how Wynn Ellis, the first owner of the Castle, also responsible for the building of the almshouses, might have felt about such brazen advertising. The road ahead forked left towards Marine Parade and the grassy slopes studded with colourful beach huts, but Pearl headed straight onto Tankerton Road”