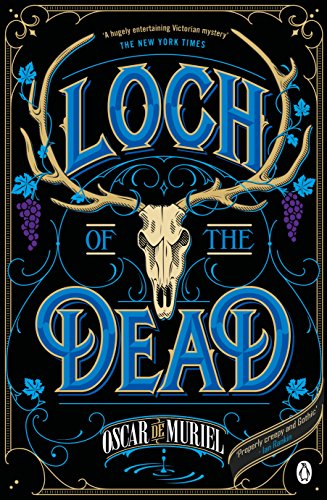 1873, 1889: A mysterious Scottish island lures people to it and doesn’t allow them to leave…

A mysterious woman pleads for the help of Inspectors Frey and ‘Nine-Nails’ McGray. Her son has received an anonymous death threat -and when they find out who and where this man lives and the secrets he has in his past, they realise the problems they face.

If they help, she says she can offer McGray the ultimate cure for his sister who languishes in an insane asylum: the miraculous waters that spring in a small island in the remote Loch Maree.

Loch Maree has its own secrets to hide as well as an interesting story to share – It’s been a sacred burial ground since the time of the druids, but it’s the legends around which will turn out to be much darker than anyone could have expected. This is an unforgiving place where darkness falls, surrounds and suffocates if you’re not careful.

The very chilling and dark, gothic setting of the novel. Not a more eerie setting have you ever been to. It’s dark, bats fly around, strange people living on the central island and a very unusual look of some of the inhabitants faces..

When you realise that every single place and island in this novel are real, it gives an added chill to the mix….

This island has been sacred for thousands of years.” “It certainly has a rather…eerie atmosphere, said Uncle climbing the soft slope that led to the burial ground.”

” It does not surprise me that it would be of interest to the druids….You have a clear view of the sunrise and sunset: very useful for pagan rituals.”

The use of setting throughout is stunning – never before have islands appeared so chilling and shrouded in both fog and mystery. There are strange people living out here, collections of bones in the woods, animal skulls with candles inside… and a warning that nothing ever must be removed from the island for fear of what it will do to the person who removes it.

This writer just gets better and better

Oh and some of the funniest lines in a book – you might not want to eat “blasted herrings” ever again! Oh and the Scottish humour, the banter between the Frey and McGrey – I had tears streaming down my face.

Then BAM! out of the darkness came the gothic and dark tones.

The mix of all this books ingredients is very moreish. Gothically, deliciously moreish.