The Devil’s Feast (Blake and Avery 3) 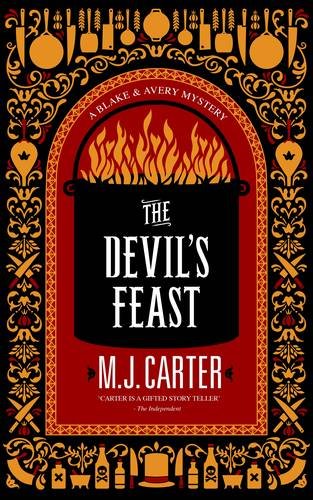 1842: An influential man dies at dinner at one of London’s top and most distinguished member’s clubs

Captain William Avery has a lot on his plate  – both literarily and figuratively. His friend J Blake is in prison – the dreaded  Marshalsea debtors’ prison  – and it’s clear that false accusations have put him there. Avery knows that Sir

Theophilus Collinson has put him there, but why and what for are still a mystery.

Things take a turn for the worse when Avery gets a invitation to eat at the club everyone is talking about – The Reform Club in Pall Mall. Soon after dinner, a very distinguished guest dies. When they discover it was poison, well you can imagine the scandal this would cause. Avery is asked to investigate as there is an even more important guest dining at the club later that week . The club can not afford such a scandal.

But solving a mystery of feuding chefs, French and Egyptian politics, secrets hidden deep within the club are hard to separate. And then Avery gets the biggest shock of all…

This is the London of Avery and Blake gourmet style

The Devil’s Feast is exactly what it says on the tin – a feast for the eyes, ears and taste buds as you read every page. The year is 1842 and the setting of the Reform Club is an exciting and privileged world. Once where the world of gourmet food is evoked with relish (sorry)

“The Reform Club is modelled on the Palazzo Farnese in Rome. ..”But given an admirable, if slightly gloomy , English accent and a little bit of Greece in the frieze, copied from the top of the Acropolis”

The Celebrity Chef of his day – Alexis Soyer

The writing is evocative of taste and food references. Someone’s hair is salt and peppered, someone’s tongue acerbic. And let’s not forget the amazing kitchen inside the Reform Club itself – it’s spotlessly clean, a place where the best chefs battle it out, the first to have dividing screens vast gas stoves and a table with twelve sides to allow twelve cooks to have their own space. A kitchen showing the triumph of science and a kitchen of the future”

Top chef Alexis Soyer was a real chef in his day and the dishes he created were real too – deliciously described. He was in fact the first world celebrity chef of this day. He was the man who reinvented the soup kitchen and a way of baking bread en masse – so effect that he ended up healing to feed the people during the Irish famine

Another historical insight is made in to the development of the company Crosse and Blackwell and the advent of food legislation. Companies such as these used to add extras such as copper to make food stay red in the can. Other strange habits in Victorian society was the way people enjoyed eating arsenic for it was considered goof for preventing disease and increasing sexual potency. That’s if it didn’t kill you first.

If you can’t stand the heat you’d better get out of the kitchen! That should have been the warning given to Avery in this novel as he’s drawn into a world of gourmet food and high level power struggles. What lies behind the kitchen door of one of the most renowned members clubs in London? Avery has a great deal on his plate in this latest mystery in more ways than one!

Avery and Blake’s third adventure starts off very differently indeed since one in in a debtors prison and the other a rather confused guest at a dinner party.

The story flits between the debtors prison and the Reform club and is centered around a very complex investigation of lies, intrigue and deadly poison. The plot was slower than in previous books and was more descriptive than before but then this involved real historical events and figures and so was a different novel altogether in many ways. I’d never read about an historical celebrity chef – maybe the Gordon Ramsay of his day – Hells Kitchen it most certainly is.

I love the humour and chatter in this book between the leads and all the other characters. The French chefs, talk of food and how a grand kitchen was run was interesting and I was practically licking the pages on more than one occasion. Do you remember that Columbo episode Murder Under Glass – with all that fine food and the poison case? I thought that one of the best episodes and this book really got into the subject and chewed it over, juicy tidbits flying out from all directions.

I felt quite emotional at Avery and especially Blake’s plight – a brilliant duo who complement each other very well  and the cast of characters is strong.

MJ Carter has written three immersive novels now and I can’t wait to see where she takes us to next.