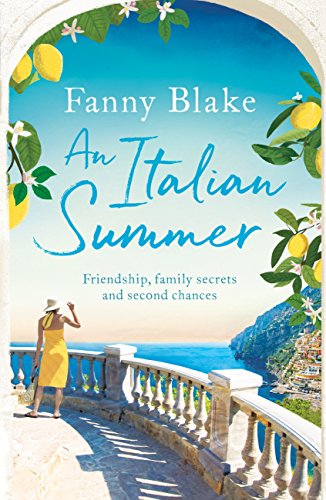 2000s: Who fancies a group holiday to Italy, Rome and Naples?

Sandy is in her fifties, and at a crossroads in her life: she’s a teacher and respected by her pupils, but she feels she is being sidelined in favour of younger colleagues. So when her mother dies, leaving her a sealed envelope addressed to an unknown woman living in Naples, Sandy decides to head to Italy to resolve the mystery by delivering the letter herself.

She books herself on to a small sightseeing trip from Rome to Naples and the Amalfi Coast, hoping to meet some like-minded people along the way. Who is the mysterious woman she is searching for? And will Sandy find friendship, or even love, along the way…?

There’s a tour called the Taste of Italy in the book and this is the group tour the characters take.

“Termini station was loud, crowded and confusing” The characters stay in Hotel Cecilia in Trastevere, a busy part of town. In her mother’s diaries, it’s interesting for Sandy to read that she writes “I’ve got to see the side of the city that Mrs R might not appreciate”

Where the characters stay in 1952. “You will like Rome. Good food and lots of sunshine”

The character stay and have lunch in the Albergo st Paulo which would be an ideal place to read this book! Rest a while and then head out on the tour to the Colosseum. Sandy’s mum in 1952 writes:

A massive ruin on a roundabout with cars and Vespas whizzing round it. You couldn’t miss it. Mrs in raptures. Waht went on in there sounds pretty bloodthirsty. I’d love a ride on a Vespa”

and then in the modern day:

“Nothing much seemed to have changed”

There’s also something else that hasn’t changed. The Gelato di San Crispano where they sell the best icecream as they have done for years!

Of course, what visit to Rome would be complete without the Vatican and the Sistine chapel. St Peters Church?

But don’t’ forget the hidden gem that is the Campo de Fiori market which Sandy loves. http://www.turismoroma.it/cosa-fare/campo-de%E2%80%99-fiori?lang=it

“Under bleached out awnings, the stalls were laden with fruit and vegetables , that customers picked up and turned over, selecting the best. Aubergines sat alongside beefy tomatoes and courgettes with their papery yellow flowers. There were oranges, lemons, multi-coloured squashes , wheels of cheese , barrels of different kinds of olives and bottles of olive oil, pasta of all shapes and sizes: bucatini, tonnarelli, spaghetti, ghocchi….”

“Pompeii – the bit I’m looking forward to the most I think.”

They want up the hill towards the ruined city of Pompeii in the stifling heat:

“Umbrellas up and hats on, water bottles and sun screen at the ready.

Miriam back in 1952 also had a strong impression of it:

“Pompeiii -hot but extraordinary. The atmosphere there. To think of all those people wiped at a stroke. What a tragedy.”

Visit and wander down Via Dell’abbondanza with all the shops and busy crowds. There’s a literary spot from the Elizabeth Gilbert novel here with the Napoli Sotterranea too – the underground places underneath the city which is great to visit, but sadly the group don’t have time to go.