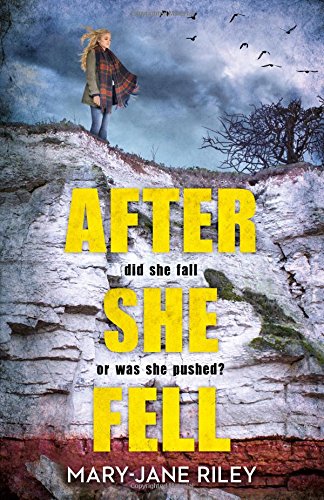 2000s: A suicide or something altogether more twisted?

Blogger KatherineSunde3: Alex Devlin has moved since the truth of what happened to her sister’s children emerged at the end of The Bad Things, she now lives in London far from the wide open spaces of Sole Bay but she has secured herself a job as a journalist writing, at least in part, serious pieces.  At the opening of After She Fell, Alex receives a call from a very old friend. Catriona is now a powerful woman, MEP and newly married to a younger man but the investigation she wants Alex to carry out is far from that world. Her seventeen year old daughter Elena Devonshire has committed suicide, it is official the Coroner’s inquest has deemed it so, but Catriona simply doesn’t believe it. Promising money and an exclusive Alex can’t resist her friend’s pleas and sets of for North Norfolk, to her home country, to see the exclusive boarding school, The Drift, where Elena was at the time of her death.

With accusations of depression and anorexia levelled against Elena Alex needs to get passed the highly controlling head teachers who are determined to protect the school’s reputation at any cost so she finds a teacher on the inside to do the job for her but will he be able to come up with enough information to help the bereft Catriona?

For After She Fell I wanted a story that showed rural life was not always as idyllic as it sometimes seems. I also wanted to portray a sense of desolation and alienation, so I looked to the North Norfolk coast and a village called Happisburgh (which I called Hallow’s Edge) which has suffered from relentless coastal erosion over the years, with roads and houses literally falling into the sea. I invented a private school (The Drift) to ramp up the tensions between incomers and villagers. The book is mostly set in Hallow’s Edge and the school in order to give a feeling of claustrophobia. There is bullying, drug-taking, corruption and death, all taking place in the bubble that is Hallow’s Edge.

There is, however, one trip into the nearby town of Mundesley, with its bucket-and-spade shops, cafes for afternoon tea and beautiful, endless beaches. A pivotal scene takes place here, and I wanted the reader to be able to breathe and take it in, to feel the air and the open space before returning to Hallow’s Edge and the evil that lurks there….

Once again Mary-Jane Riley has painted a wonderful selection of characters, some nastier than others, against the brilliant backdrop of the setting all with a lightness of touch so that the picture is painted while the action is taking place.

We meet the impatient second husband, the awful head teachers, the overly exuberant school receptionist and a raggle-taggle bag of teachers, and don’t even let me get started on the awful array of posh kids at the school, or their poorer relations in the village with whom a healthy rivalry is kept alive.

The thing I like about Mary-Jane Riley’s characters is that there are elements of realism about them all, even those who don’t get a centre-stage part, who may rely to a certain extent on clichés and prejudice, are given shading to lift them clear definition, allowing the reader to imagine we could visit Hallow’s Edge and walk into Hallow’s Edge Tea Parlour for a cup of tea and a piece of cake.

This is one of those books where the reader has more information to hand than the investigator because we hear Elena’s voice through her diary – labelled with the number of weeks before she dies, lest we forget for one moment. Elena’s voice is authentic, she isn’t an identikit teenager although from time to time she talks the talk, even if she doesn’t do the walk. Elena has one friend from her old life with her, Tara, a plump girl who longs to be part of the ‘in group’ the Queen Bees, whereas Elena has a different focus, one that she’s keeping secret, even from Tara.

I particularly love books that have multiple strands and while some of these seem more important than others, the author hasn’t let even the minor ones drift without some sort of tethering which makes for one tense ending, I can tell you.

Brought to you as part of the #BookOnTheMap Challenge with @cleo_bannister