Whispers of the Sand 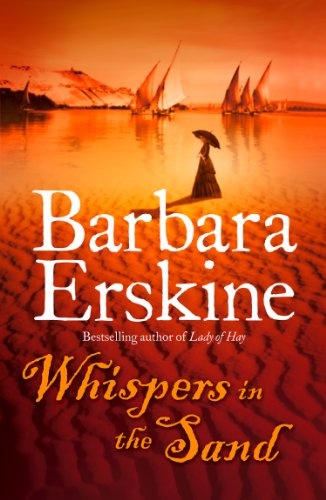 1800s, 1900s: Retracing in the steps of her great grandmother who travelled across Egypt, a young woman meets up with the ghosts of the past..

Anna, recently divorced from her bully of a husband is in need of a holiday. So when her aunt suggests she should take a trip to Egypt and follow in the footsteps of Louisa, her Great Grandmother, who took a Nile cruise from Luxor to the Valley of the Kings, she is intrigued.

Armed with Louisa’s diary and a small perfume bottle, she starts retraining her steps of the past, but as she does so, it appears that the bottle she is carrying holds a lot more than the secrets of long ago and that discovering its origins could explain a lot more about Louisa that Anna could ever have hoped for.

Anna soon discovers the chilling secrets  of the past and is chased by the same terrifying spectres as Louisa before her.

A distant relative and secrets from the past which are revealed in the sands of Egypt and as the grains of sand disappear, the truth of a hidden past come to light.

Egypt of the past

From the pages of an age old diary, the story of an Egyptian past come to light. Louisa tells her story via her own words, takes us on a tour of Egypt and her love affair with tour guide Hassan. A scandalous thing for a woman at the time. the words from the past float in to the present from the page –

“The heat of the day which at first renewed my spirits after the long voyage out here is growing stronger, but the nights are blessedly cook. I long to be able to see more of the desert.”

Regrets and reminiscing fill the diary and the heat of the Egyptian desert, the grit of the sand and the sails of the ships on the Nile paint a the scene of Louisa’s Victorian adventure.

Another breath of cold air and she could hear the rustle of palm fronds on the bank. Above, the stars were violent sparks against the blue-black sky.

The scent bottle holds more than secrets of the past and this link haunts the present. The old history of the bottle and its origins go back to the days of a dying Pharaoh….but it was the centre of a war which has caused phantoms of the past to haunt this bottle. Found in the present day, not all ghosts have been buried in the Egyptian sand.

As Anna follows Louisa, years apart, there are men on the boat and someone from the past who wants to stop Anna in her tracks. The bottle continues to haunt and the diary reveals an Egyptian adventure Anna is amazed Louisa took, finding out much about Louisa herself at the same time. History and ancient Egyptian curses….evoked and brought to life…

“Anhotep looked down, At the base of the alter, the sacred potion lay as a cool, blue green pool on the marble, stained by the curdling blood of two men”

The illustrations on the endpapers which show a map of Egypt and the tourist sites is a great addition to the story. Mind how you go if in Egypt however!