The Thirty Five Timely And Untimely Deaths Of Cumberland County 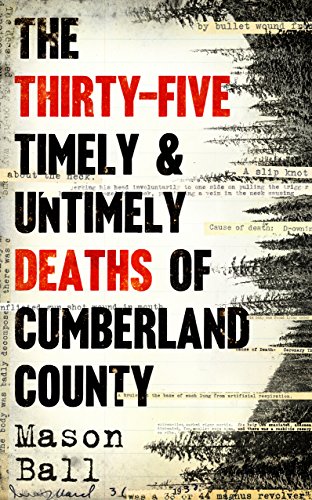 1930s: In Naples, Maine, during the dying years of the great depression…

The dying years of the great depression; John Bischoffberger is a Pennsylvanian doctor adrift in Naples, Maine, struggling with his loss of religious faith and retreating from painful memories of The Great War. As Medical Examiner John must document deaths that occur under unusual or suspicious circumstances. Yet as he goes about his work, he begins to suspect that the deaths he is called upon to deal with are in fact far from routine. He becomes convinced that three itinerants are going about the county, killing. An old woman, a little girl, and a thin man are fulfilling some strange and unspoken duty, brutally murdering men, women and children; and the deaths seem to be drawing closer to John: others who may suspect foul play, then acquaintances of his, then perhaps friends, even family members. As the storm clouds of a new world war gather in Europe, and John’s rationality slowly unravels, he must find a way to disprove what he has reluctantly come to believe, or to confirm his worst fears and take steps to end the killing spree of the three in the woods, whatever the cost

Naples is one of the most picturesque small towns in Western Maine surrounded by nature as far as the eye can see. It’s right at the heart of southern Maine’s Lake Region and with the water and space in abundance, you can drive along the Naples Causeway on Long Lake & Brandy Pond where there are lots of outdoor and water activities for all the family. Granted if you take this book, there’s a whole other side to the region to explore, but then that’s half the fun of literary travel isn’t it?

The only way to travel around these parts are boats, kayaks or jet skis. For the more adventurous there’s the seaplanes or the local 300-passenger replica of a Mississippi River stern paddle wheeler.

Granted, some of the places in the novel are where deaths occur but there’s an extra frisson when you see how pretty this place is and where evil must cast its shadow!

I supposed the title should have given it away – there is a LOT of death in this book. A lot of bodies, a lot of medical procedures not found in any hospital and ones more acceptable. It’s a gory mishmash of a horror novel, a gothic one and an altogether “ no, this can’t be true” read. Except that’s where the greatest horror comes from – the fact that much of this novel is based on true facts – real death certificates pepper the entire novel which was a brilliant addition to an already compelling read.

I know very little about homeopathy but this is looked at closely in this story. A doctor examines bodies and examines the concept of death of those who have died between the two world wars. He is fascinated by people who have suffered, died violent deaths, been tortured or died in some equally horrific way, which during war time was more common that anyone liked to believe. He starts to wonder, his mind takes over as do the ghoulish thoughts which hinder him and haunt him in life. He sees and examines evil in all its forms and some is more evil than most.Not sure if animal lovers will be able to stomach some scenes.

For all its gore, it touches upon some interesting ideas – that of what we would call PTSD now. How men returning from war have mental health issues, and how the evil of those times can stay in people’s minds years later. What does a doctor do to cope himself with all of this? How does a man working with evil prevent himself from becoming attune to it all.

1930s Maine and the medical profession were nicely evoked. The town of Naples (no not that one) was a nice refreshing change when looking at the problems of America at large.

It was a fascinating if not gory read. Don’t eat during the reading of this novel and good luck sleeping if you read at night. Scary and thought-provoking in equal measure.