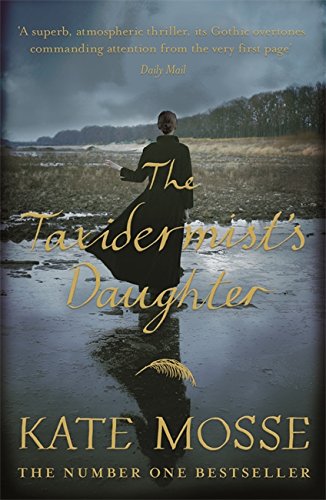 1912 : a gothic tale of spooky happenings on Fishbourne Marsh and a decaying Taxidermy museum.

In a churchyard, villagers gather on the night when the ghosts of those who will die in the coming year are thought to walk. Before the night is over someone will lie there dead.

Connie Gifford lives with her father in a decaying house: it contains all that is left of Gifford’s once world-famous museum of taxidermy. Now a decaying reminder of death.

The death of the woman in the churchyard starts memories to resurface –  much like the rising waters which threaten to swamp the village. Connie wants to discover who is responsible – just who is that figure she sees watching from the marshes? More spooky goings on are afoot and Connie’s life in Fishbourne takes a new and dramatic turn. Someone is out there, waiting, watching…

A woman is found garroted with taxidermist’s wire, her corpse found outside Blackthorn House, where Connie is attempting to stuff a jackdaw.
a nearby church where people wait to see if the ghosts of those who will die in the coming year will appear. This is a gothic and chilling place to be as the white mist sweeps over the marshes and clouds both the view as it does people’s judgements.

Fishbourne is where Kate Mosse grew up and where she remembers weeping willows and streams; a Roman Palace, the Old Toll House,  a post office, a Methodist Chapel. Extended from its medieval origins, the marks of pilgrims travelling to visit the shrine of St Richard of Chichester can still be seen scratched into the outside bricks on the north-west corner of the nave.

“The jackdaws were watching, silhouetted against the dusk sky”

The muddy, tidal estuary of Fishbourne Marshes, Fishbourne Creek and the remains of the Old Salt Mill are real and very spooky, gothic places.

This is the home of Connie and her father who once proudly owned Gifford’s World Famous House of Avian Curiosities, a taxidermy museum which has seen better days as has the father who has sunk into drunken inertia. Connie struggles with this legacy and with a memory loss of tragic events some 10 years previously.

If you’re squeamish – be warned that there are detailed descriptions of the craft of Taxidermy and the slicing of the knife. A queasy insight into what exactly is involved with this so called ‘art form’ and the belief that-

“…in death, beauty could be found … Each creature had left its imprint upon her as much as she had left her mark on it.”

The most iconic site has to be the church where the ghost story originates in the book and of course the taxidermy museum which used to be in Bramber, West Sussex until it closed in the 1970s.

When researching the former West Sussex County Asylum, Graylingwell Hospital, to learn about the lives of patients Kate mentions on her website that Graylingwell Farmhouse was the childhood home of the novelist Anna Sewell, of Black Beauty fame.

How I loved this book. A gothic tale set in Sussex and  a clear example of how an author is both inspired by the stories and landscapes of her childhood. Landscape is a feature of all of Kate’s books but is here that it has a real poignant meaning to it. The story of ghosts was not real but the museum of taxidermy and the fact that people worked like this was. Fact and fiction blended so seamlessly makes for  a fascinating read and even if some of the sections on the art of taxidermy are  a bit gruesome to read, you can’t deny the accuracy of something that the people of that time merely accepted as ‘art’.

Connie and her father were really well drawn and creepy characters and I was never sure if to believe them or not but I was captivated by the work which went on at the museum and the struggle Connie has in trying to identify the killer.

Gothic mysteries are endlessly fascinating and a creepy eerie but totally fascinating read from Kate Mosse. Totally freaked about birds  now though. Especially stuffed ones.