The Secret of Vesalius 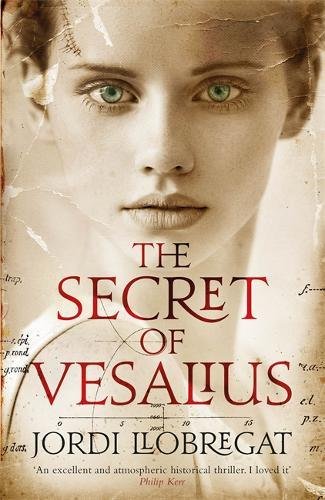 1888: In the year Jack the Ripper stalked the streets of London, an even darker forced stalked those of Barcelona, and the tunnels beneath…

Daniel Amat has left Spain and all that happened there behind him. He’s soon to start working in Ancient Languages at Oxford University and is getting engaged. Life is good.

Until the day a letter arrives..one from Barcelona

Forced to go back to a city he’d hoped never to see again – a city of shadows and tunnels, just days before the great 1888 World Fair. There he’s faced with an unthinkable truth from the past and

a series of murders which people fear are reminiscent of an ancient curse. Daniel has to look at the work of the 16th century anatomist, Vesalius to find out more and this sucks him into the tunnels deep below Barcelona, where his own dark past and the future of science are joined in a terrible venture – to bring the secret of Vesalius to life.

This is an immersive, gritty and grimy stroll around the darkest corners and shiftiest neighbourhoods of Barcelona. In the run up to the famous world fair of 1888, this takes place in the same year that Jack the Ripper roamed the streets of London. Coincidence? The street lamps and cobbled lanes are the same, the night is grey, cold  and the rain falls like pellets from the black sky.The site of the World Fair is the focus of the novel and of Barcelona at the time.

The fair was hosted in the city’s main public park, the Parc de la Ciutadella, with Vilaseca’s Arc de Triomf forming the entrance. The fair was opened by Alfonso XIII of Spain and Maria Christina of Austria. It was a grand affair by even today’s standards and people from all over the world attended with more than 27 countries taking part.

“Stretched out before him was the site of the World Fair. He recognized the different buildings thanks to a wall poster he’d seen the day before lampooning the works, To his left, the Palace of Industry and Commerce stood like a gigantic fan. Its seventy thousand square feet were due to house the latest technologies: an homage to the ingenuity of mankind. Across the palace, the ruins of the old citadel had een turned over to lush gardens, complete with a waterfall an numerous copses of trees. On either side of the grove, what was to be the Conference Hall stood along side the Martorell Museum; the opening ceremony was planned to take place here, with attendees including the Queen Regent, the King, and all manner of dignitaries from across Catalonia and country-wide.”

The main thoroughfare of the city in the novel comes to life:

Fruit and vegetable cars headed for La Boqueria market vied with horses and traps. Along came the Catalonia Line tram, hand bell ringing out. Match sellers, newspaper vendors and florists cried their wares as the housekeepers hurried past, and well-to-do ladies and gentlemen strolled by.”

Santa Creu Hospital occupied a distinguished gothic edifice. Built four centuries earlier as a single place for the city’s various hospitals to in habit, in the intervening period an array of new passageways and wards., and stairways joining them, had been added. Placing the Royal College of Surgeons next door had been a unmitigated success, seeing that it had allowed for the practical education, for over one hundred years, of Barcelona’s future medical practitioners. The city had produced a significant number of distinguished medics as a direct result.

Daniel travels out to La Sarria and the famous hills surrounding the city of Barcelona to investigate a matter of importance at the sanatorium.

“On  a clear day, the views stretched across all of Barcelona and way out over the Mediterranean”

The city comes to life as do the tunnels below and the dark shadows lurking all around, each and every corner.

“Barcelona was a place of wonder, but it could also be cruel to any person who failed to stay alert.”

A good thriller which read in places as being remarkably similar in many ways to Shadow of the Wind. Gothic streets, dark shadows, menacing archways, strange characters standing next to gas lamps in cobbled streets…… it’s not on the level with Shadow of The Wind though, although I did enjoy it. It’s a good story but it’s far too long and I think it would have been a much stronger story if shorter and neater. Having said that I was pleased to stay in this Barcelona for as long as I could!

What really shone however was the use of the setting and the magic of Gothic Barcelona. It was as if the city WAS the main character and I think it was. Frankenstein seemed to be walking its streets, a mad scientist was conducting experiments and the fog around those gas lamps was getting thicker by the chapter. There’s a lot of interesting history in this book too – the World Fair is only days away and people are getting very excited. It’s a big event, attracting people from all over the world.You can sense the nerves in the air –  Daniel, Fleixa and Pau’s especially as they come together to look into the work of Andreas Vesalius, a sixteenth century anatomist, that is motivating an insane serial killer to commit horrific crimes. The World Fair brought out the good,the bad and the ugly into the city’s streets and what an event it was.

A small point – not sure if the cover of the copy I got is going to be the end one but I didn’t see the connection with the story. This needs Barcelona firmly in all its gothic splendour, the World Fair, the fog!

All in all, The setting, time period, history and gothic delights won me over – I’d be interested in reading it in Spanish now to see if the language changes the book and brings things out I might not  have seen.