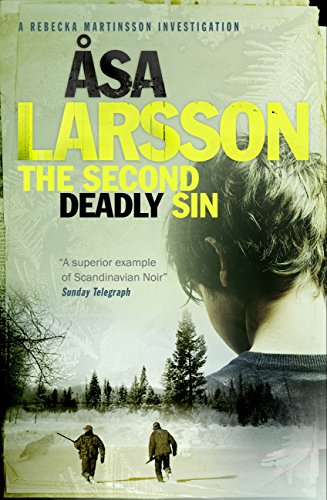 2000s: The fifth installment in the Rebecka Martinsson series, set in the remote location of Kiruna. On a deadly bear hunt, a grisly discovery is made…

A bear hunt reveals some grisly discovery in the woods. What happened in those woods?

A woman lies murdered, crude abuse scrawled on her bloody bed. Her grandson is missing….

Rebecka Martinsson, dropped from the case thanks to a jealous rival sees a connection and decides she has to find the answer to this most brutal of crimes. Linked back to that fateful discover on the bear hunt, and it’s a grisly hunt for a killer on a mission.

Kiruna was a black silhouette against the graphite-grey sky; the huge granite terrace on the mountain where the entrances to the iron ore seams were located; the skeleton -like clock of the town hall, the triangular church perched on the mountainside like a Lappish shack

The coldest most northern town in Sweden and the ice, unforgiving forests and vast expanses of space is the setting for a grisly bear hunt which sparks off a series of crimes and deadly secrets in Swedish lapland…

From the very first line the chills come thick and fast

This is a landscape where bears roam and hunt their prey, where hunters track them down and where the bear sometimes reveals something it has devoured..

The landscape is unforgiving rugged and raw. Isolation for these people is daily life since Kiruna and nearby Kurravaara are two of the most northern and isloated places in Sweden.
And there is  a killer amongst them..

There is a link between the bear killing and the woman now. As the investigation continues,more links to more murders appear…the icy trail is closing in on one village, one house, one person…

This the the murderous grisly unforgiving Lapland  “forbidding as the creaking, squeaking, relentless midwinter.”

Linked to the main tale of the crime story, we visit Stockholm to see glimpses into Rebecka’s private life with her romance with someone from the law firm where she used to work. Her love of dogs and desire to get justice are admirable.

Further story strands create flashbacks into 1914 and the growth of the area with mining and other intensive labour. The war has an affect everywhere and even in these small northern communities, ripples of destruction are felt..

Hard to say what I love best about this novel – is it the plotting, the character of Rebeckah, the setting, the subject matter, the clever unravelling of clues?

All of it frankly as this was a very tricky subject matter to sort out and the clues were as random as the bear prints in the snow which we met at the start of the novel.

I can still hear that dog scream in the first chapter. The rough, raw rugged landscape and the men sent to shoot the bear. Bloody, visceral and a whole series of emotions captured in one small chapter.

It only got better after this with the history of Rebeckah, the town where she returns to and the backstory of the characters merging seamlessly with the main plot, adding intrigue upon intrigue upon the main story.

And the biggest intrigue is probably the setting for we visit a land, a lifestyle and a culture alien to most. It fascinates but chills at the same time. It could lead you in and then kill you, its a place where bears roam and dogs scream, and the place has a dark history leading back to WW1

I’d finished the book before I even realised and I was left sitting feeling chilled and raw. My cheeks were ruddy and I had the smallest traces of powdery snow on my shoes. It felt that real.