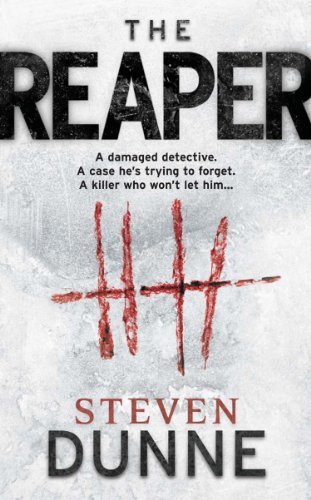 2000s: A damaged detective, back in Derby following a traumatic career in the London police force comes face to face with his past.

DI Damen Brook has fled to Derby following a traumatic time in London where he started his career in the Met. He left everything behind, including his family, friends and everything he knew following a nervous breakdown. Wanting to wind down his career in Derbyshire, he feels that the peace of the Peak District will be a good place to let go for good.

But the past has no desire to let him go that easy. And it’s not long before he is confronted by a serial killer named the Reaper who he hunted many years earlier. This killer enjoys slaughtering families in their homes before disappearing without a trace. Now in Derby, an killing again, Brook is at pains to find out why but to do that he has to face up to some very dark thoughts indeed.

The place to hide away and recuperate from a career that almost killed him. Brook, following his breakdown returns to the job on a quieter and calmer patch – or so he thinks. Present day Derby looks just as deadly as the streets of London he very nearly lost his life over. The fictional Drayfin estate is a bleak place to be

“There weren’t nothing worth stealing on the Drayfin no more..”

A series of murders bothers Brook for their similarity with those of the man who cost him everything. Now, outside of London, in his new home, this killer has come back and followed Brooke to this part of the world, to his new and untainted world.

To find this killer Brook has to find out what the Reaper is doing in Derby, and why he’s started killing again. And this time it’s personal –

“The Reaper came to Derby because you were there”

The Reaper stalked the streets of London and Brook found out who committed the crime but it was the lack of evidence which enabled the man to escape justice. That failure as he sees it cost him everything and his family and left him with a mental scar that colleagues try to use to provoke a reaction from him.

It seemed he was about to make one of those periodic visits to hell that he’d moved to Derby to escape….

Investigations both in London and Derby unravel at the same time to reveal a past and a present that Brook has to come to terms with in order to prevent more death and destruction.