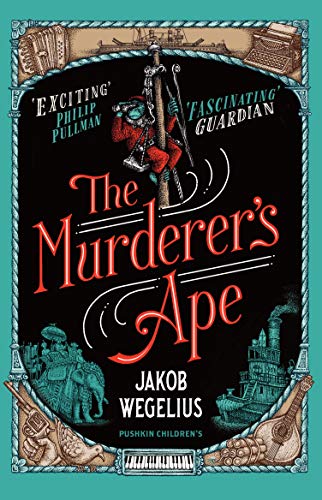 You’ve never met an ape quite like Sally Jones before1

Sally Jones is an extraordinary gorilla and a brilliant ship’s engineer who sails the high seas on The Hudson Queen with her loyal friend the Chief. One day the shipmates are offered a mysterious job that promises to pay big bucks, but then disaster strikes, the job goes wrong and the Chief is falsely convicted of murder.

For Sally Jones this is the start of a grand adventure and a desperate quest to clear her friend’s name. By freighter, steam train and bi-plane the intrepid ape journeys from Lisbon to Bombay and beyond in search of the truth. But powerful forces are working against her.

They sail the British waters in the summer but when autumn arrives they decides to sail for warmer latitudes to avoid the winter stories in the North sea.. They stock up with tin cans in London on the way to the Azores but then they meet a while:

The whale survived, but the Hudson Queen took such a thump that the rudder was bent.”

It’s never much fun to be stuck at shore, but there worse worse ports than Lisbon to be stuck in. We used to sped ot Saturdays riding around the city by tram. You won’t find smarter trams than Lisbon trams any where in the world, not even in San Francisco”

At the Alfama docks

“In Alfama they didn’t even bat an eye at an ape in a boiler suit and that was good for me.”

The ship’s journey really starts at this point. Some highlights on the journey…

The reflections of the few lights in the little town sparkled on the river. The outline or the church tower showed up against the dark sky.

The town square was not far from the river, and we could see a warm glow coming from an open doorway. As we approached we could smell newly baked bread.

The Feluccas, those small Egyptian sailing boats with lateen sails, completed the scene. The breeze coming off the shore was a heavy mix of all wonderful scents and foul smells of a great city.

It’s here where they stay with a maharaja and come across a boat called The Malabar STar. It’s a common name for boats on the west coast of India so one is very hard to find!

It’s in India that they encounter the hot summer followed by the monsoon season with cooler weather and rainy days.

There’s many stopovers in the country with Cochin and Hydrabad and Jodhpur on the map but they’re to discover for yourself…..

A joy in both languages! Having read this in the original Swedish when a very thoughtful friend sent it with a note ‘Saw this and thought of you”. Not really sure if that was a good sign since it’s about a monkey with attitude who sails the seven seas. Having said that the monkey is tough and wants to clear her friends’s  name of  a crime and investigate the truth plus she LOVES a good adventure so I’m hoping she meant this side of the book!

It reminded me of ARound the World in 80n Days and that was the firdst book on the BookTrail!. It’s got all the classic ingredients – adventure, excitement, danger on the high seas, the struggle of getting from one place to another, delays, danger in a new city, unknown obstacles and a sense of  a chance, of a discovery. Oh and that’s not without the great characters, an ape with attitude and lots of fun along the way!

I think this is a great read on many levels and certainly one to read aloud with your child doing all the voices etc. The setting is glorious with the high seas, the sense of the shipping era with huge vessels circulating the earth carrying cargo from one place to another. The list of exotic places is a treat for any traveller, literary or otherwise –  sailing from one to the other with all the sights and sounds along the way is just magical when you are in such good company.

Oh and don’t call the ape Sally – she hates that. Only the full Sally Jones will do. She would love the front cover of the book – artwork she probably did herself given her many talents!