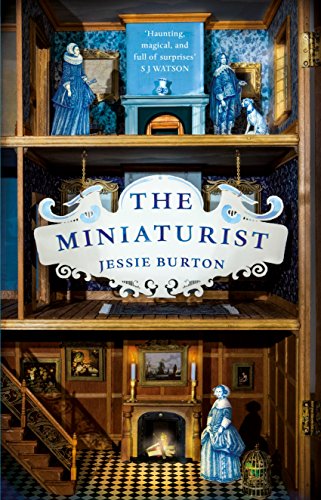 1686 – What an amazing premise for a book! A miniaturist!! If you have ever seen an antique dolls house in a museum like Petronella’s house in the Rijksmuseum and wondered about the story behind it then this is the book for you!

1686 –  eighteen-year-old Nella Oortman arrives in Amsterdam to begin a new life as the wife of illustrious merchant trader Johannes Brandt.

However her new home is cold and unwelcoming – Johannes is not even at home at first and his sister Marin seems to take an instant dislike to her. When Johannes does appear, he presents her with a unusual wedding gift: a cabinet-sized replica of their home.  To furnish her gift, Nella engages the services of a miniaturist-but when she gets items that she didn’t ask for and which seem to be telling her something, she asks for the miniaturist to stop.

But they keep coming and the signs are getting stronger and the unwelcome gifts more telling of what the future might hold. They reflect a bit too closely persons and events in the family’s life, some frighteningly so.

To read the Miniaturist is to travel to Amsterdam at the time of the Golden Age, to peek through the windows of the rich homes along the Herengeracht Canal and see more than you’ve bargained for.

If you have never been to Amsterdam, if you know nothing of the city’s wealthy area known as the Golden Bend and the Herengracht canal, then you will soon be transported there….back to 17th century Amsterdam at the time of the Golden Age and the birth of the Dutch East India Company, the bustling canals, the trade in sugar and other commodities and the secret goings on behind a door in Kalverstraat.

“This part of the Herengracht is known as the Golden Bend, but today the wide stretch is brown and workaday.”

The story focuses on an object of beauty, a miniature dolls house that is currently on display in the Rijksmuseum. Such houses were coveted by wealthy families during the Golden Age since they symbolised wealth and status. Nella finds a miniaturist and goes to pay them  a visit on the Kalverstraat, under the sign of the sun. The Kalverstraat is a long busy street away from the canal, where many sellers ply their trade.

When Nella receives a parcel from the miniaturist, there is something written on it –

“Every woman is the architect of her own fortune”

Nella is puzzled not only at this but at what is inside. She soon realises that she has received a lot more than she bargained for. The Miniaturist has sent additional items, items not requested or discussed…

And they appear to be mirroring the life of their real life counterparts in the most unexpected of ways….

Amsterdam at the time of the Golden Age was a frenzied hub of trade and activity in sugar loaves and other commodities. The book comes alive even here with the sights, sounds and smells of the canals and their significance coming alive right off the page –

“Nella turns to the canals as bargemen’s laughter rises up the opposite brickwork. A puny lad has skittled into a woman and her basket of fish, and a half-dead herring slithers down the wide front of the seller’s skirt.”

Amsterdam, the trading days of the Golden Age with the sugar loaves and the art of creating miniature homes is an enticing and exciting literary journey indeed. 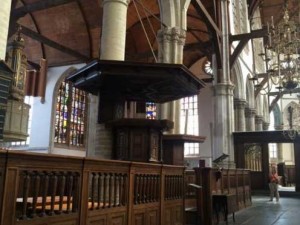 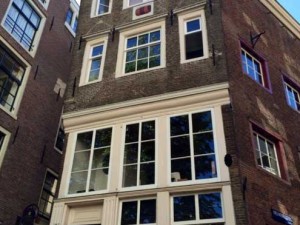 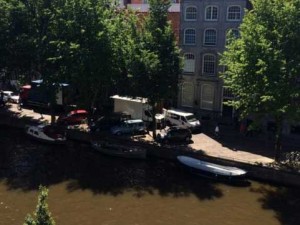 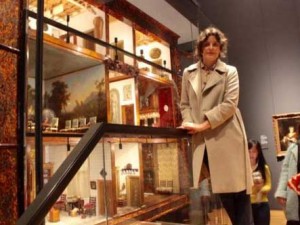 The Miniaturist is the most exciting premise I have come across in fiction for a long time. Jessie Burton’s imaginative writing however is the real treasure of this book. The characters are vivid and real, so much so that even the ones you don’t like at the start – (Marin) reveals a lot more depth to her as the events of the story unfold.

And like a dollhouse, the more you look, the more you see and you can’t believe the small things you missed along the way. The shadows of the dollhouse provide intrigue and mystery and there is a feeling that a Jessie leads Nella down the twisty streets and along the dank canals, she is doing exactly the same to her readers leading them on a tale of discovery and mystery. Some things you can guess others not, but the big reveal when Nella finds out is still a thrill for how she comes to that conclusion.

There is nothing hidden that will not be revealed –  a message from the miniaturist or an apt description of the novel?

Nella is a fascinating character – a woman who struggles to adapt to the social mores and expectations as the lady of the house. And Peebo – her parakeet – loved this nice little touch. Nella feels as trapped as Peebo is in a cage of her own – a gilded cage at that since she is given wealth and a new status in society but one very much controlled by her role in life and the men around her. Women of the time had little, if any, independence and were dictated to by men leaving them with no power of their own. Marriage, paradoxically, was seen by some as the only way for women to secure any influence over their own lives. But this marriage is to give Nella more challenges that it gives her influence.