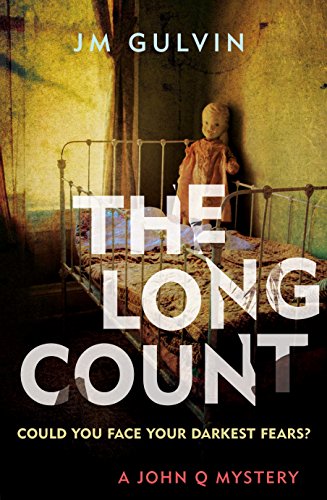 Isaac has just returned home from fighting in Vietnam as part of the US Military only to find that his brother, who was being treated in a mental asylum has escaped.

What’s worse, he was able to escape due to a fire destroying the building and that he’s not only missing, but suspected of being the perpetrator of a series of murders across many Southern American states.

Enter John Quarrie – Texas Ranger who is soon on the case. He and Isaac join forces to find out where Ishmael is and what the truth is. A race against time takes them across state lines in a fast paced thriller. For their father is dead and Ishmael is the prime suspect. Their mother could be next on the killer’s list..

The Long Count is a dark thriller set against the backdrop of the Vietnam War and all the ripples from that historic time in history. The treatment of those with mental illness is also explored and the cruelly with which sufferers were treated is shocking and disgusting in equal measure. A psychological setting to the time of the novel.

Set in Texas and other southern States, the inclusion of a Texas Ranger gives this novel a feel of the  Texas of the 1960s, where the pace of life was different and the method of police investigation was very much so.

Texas, with its sprawling desert like landscape and huge potential for someone to flee from justice feels like the wild west of the 1960s.

“Perched on a rock, Quarrie had his shirt off and the heat of the sun on his back. Mud-colored waves danced where the breeze sculled the surface of the river”

This is also the setting of Americana, Texicana and a way of writing that immerses you in every little detail of the atmosphere:
“Sleeveless Levis soaked in sweat, he made the platform where  his gaze fixed on a Coca cola machine”

Well this was an opening chapter I’ll not forget in a hurry! I can still feel the heat of the Texan sun on my back and the sweat running down my face.

This is the first book in a series and I’ve very pleased about that! There’s something about this Texas Ranger that I like and respect. I can’t say I’ve quite met any one like him before and I’m keen to see what happens in his life next. He does get up to some violent goings on and some dubious assignments but then this is his world  – matched only by the writing. First there’s the short sharp opening chapter which stabs you in the heart and then the second one which transports you back so quickly to the slow Texan pace of life that I swear I got whiplash.

Back and forth, back and forth I went. And the whiplash got worse but it was totally worth the ride.

Quarrie is an intriguing man isn’t he? I changed my opinion as to what he looked like at several point of the novel as I just can’t picture him – shadow of intrigue line his face. His lifestyle and approach to life just fascinates me and I will definitely be reading book two.

From the dirt of the Texan dust bowl, Quarrie draws you down deep in to the dark recesses of the human psyche and shows you things that will shock, surprise and totally totally get you sucked in to his world. That’s if the language doesn’t floor you with its gritty, atmospheric, native drawl.

The Long Count? I hope not too long a count to the next installment !