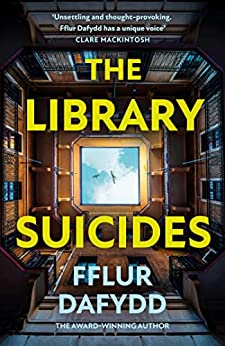 Twins Ana and Nan are lost after the death of their mother. Everyone knows who drove Elena, the renowned novelist, to suicide – her long-term literary critic, Eben. But the twins need proof if they’re going to get revenge.

Desperate to clear his name, Eben requests access to Elena’s diaries at the National Library where the twins work, and they see an opportunity. With careful planning, the twins lock down the labyrinthine building, trapping their colleagues, the public and most importantly Eben inside. But as a rogue security guard starts freeing hostages, the plan unravels. And what began as a single-minded act of revenge blooms into a complex unravelling of loyalties, motives and what it is that makes us who we are.

The novel is set in a National Library of Wales – not THE real one of courseas the real one is lovely and not at all like the one in the novel. The author is very keen to point this out in her author note so don’t be afraid to go inside this library and borrow this book. Imagine doing that? Reading the book in the very place where all the crazy things in the novel happen. You might never leave (evil laugh)