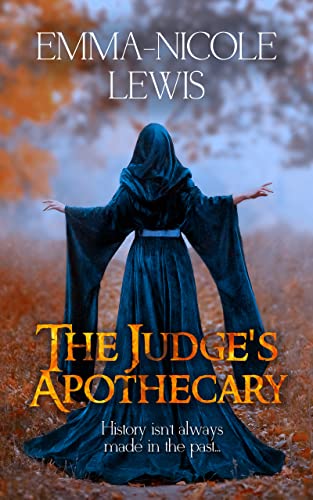 Summer 1685 – Following an uprising against King James II, the country is once again torn in two and news of a bloody vendetta is rife. Men from the rebel army are being plucked from their hiding places across the West country and rumour has it that the King’s most formidable judge will be leading the trials: the Lord Chief Justice Jeffreys.

Kateryn Fox works with her grandmother at an apothecary shop in Winchester. She is facing troubles of her own when the King’s legal procession arrives for the first of the assizes courts where those who supported the rebellion will face trial. Her husband, Gideon, has not returned from a business trip and Kat fears he may have somehow become caught up in the aftermath of the rebellion. Bequeathed an obsidian necklace capable of bringing together, future, past and present, she attempts to use its power to search for Gideon. But the spirit guides bring her warnings of ‘The Hanging Judge’ and the harrowing revenge that he will reap.

When she is approached by a gentleman for a remedy to ease the ailments Judge Jeffreys suffers, she finds herself unwittingly pulled into service as his personal apothecary. It is a position that brings great power, influence and danger – particularly for a cunning woman who is an abandoned wife.

Present day – Ruth Meadows is questioning her skills as a healer and psychic when an enigmatic and handsome stranger arrives on her doorstep carrying a necklace that he believes is haunted and her gift is reawakened.

There appear to be entities attached to the necklace and Ruth is afraid, but she far more fears the dark secret that her new client appears to be keeping from her. Through her connection to the women who have been gifted the necklace, Ruth embarks on a dangerous psychic journey that she soon realises could make or alter history.

The Judge’s Apothecary is set in Winchester and across the West country, during the time of the Bloody Assizes that took place after James Scott, the Duke of Monmouth, led a failed rebellion against King James II.

The modern day part of the story begins in Winchester and moves to Somerset….

Winchester is where the novel begins and ends. It is where the Bloody Assizes, led by Lord Chief Justice Jeffreys, opened and where a 71 year old noblewoman was publicly executed for providing shelter to fugitives involved in the Monmouth Rebellion. Her execution took place outside The Eclipse Inn, where a scaffold was erected outside the room she was being held. In the novel, we hear the noise of wood striking metal as it reverberates through the streets of Winchester and the lonely figure of Lady Alice Lisle is briefly seen at the window.

St Catherine’s Hill is the historic beauty spot with a famous mizmaze and clump of beech trees. It is a very spiritual place and it features in the beginning and end of the novel.

Dorchester is where the legal party for King James II travel and where Kat, the woman who becomes a personal apothecary to the formidable Judge Jeffreys, once lived. Here, through Kat’s eyes, we witness the horrifying events that took place during September 1685 when hundreds of men were rounded up and brought to stand trial for their part in the Rebellion against the King.

High West Street is where Judge Jeffreys stayed during the course of the Dorchester Assizes. The building is still known as the ‘Judge Jeffreys’ today and there are tunnels that run beneath it leading to what is now a café in Antelope Walk, as in 1685 this was known as the Red Hung Court Room where so many were sentenced to a traitor’s death.

Taunton is where Kat’s time as an apothecary to Judge Jeffreys ends in a shocking and tragic way. This was a rebellious town and is the place where James Scott, Duke of Monmouth was crowned King only weeks before he lost the battle against the Royalist Army. Shockingly, even children were sent to stand trial in front of the man who became known as The Hanging Judge. This was the inspiration for an old coaching inn that Kat visits when she comes face to face with some of the King’s soldiers who are up to no good.

Bridgwater is where the Duke of Monmouth and plotted the battle strategy that would end in disaster. In the book, it is where Kat travels to find an assay cup to ensure that Judge Jeffreys is kept safe from anyone who wishes to do him harm with poison.

Westonzoyland is located on the edge of where the infamous Battle of Sedgemoor took place. The church is where hundreds of men who were captured were held until they were sent for trial at one of several assizes courts across the West country.

There is a memorial ground that is a short and picturesque walk away from the village of Westonzoyland. This is where Ruth and Jeremy, the present day characters, find themselves at one stage in the book. We see the rhynes and the very wet Somerset Levels that Monmouth’s soldiers so bravely navigated before their tragic defeat on 6th July 1685.

It is also home to a terribly sad legend linked to a prisoner caught in the aftermath of battle. This legend is featured in the book.

Barrington is a small, quintessential village in Somerset, about half an hour drive from Taunton and Westonzoyland. It is where Ruth goes to spend Christmas with her brother Tim and his partner, Max. The book features a real pub in the village called ‘The Barrington Boar’ that I thought looks so cosy and friendly when I visited.