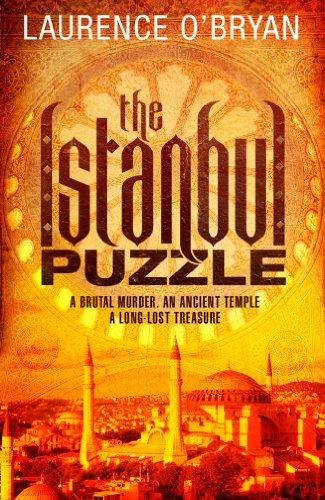 2000s: This is a booktrail waiting to happen. There’s  photographs and a trail in the book itself and the author tweets regularly about the locations and hidden secrets contained within the books. A true booktrailer if ever we saw one!

First in a series of novels featuring Sean Ryan and Isabel Sharp, an archaeologist and british diplomat.

Sean’s colleague, Alex Zegliwski has been savagely beheaded and his body has been found near the sacred archaeological site of Hagia Sophia in Istanbul.

When Sean arrives to identify him, he is handed an envelope of photographs belonging to Alek and soon finds himself in danger. Someone seemingly wants him dead.

With the help of Isabel Sharp, Sean begins to unravel the mystery of the mosaics in the photographs and inch closer to snaring Alek’s assassin.

Time is running out for Sean and Isabel. They must catch the killer before it’s too late. But then a killer virus is unleashed….

A perfect guide to the sights and sounds of Istanbul. Every iconic sight appears to have a double meaning and every stone a hidden historical agenda. With the map and guide at the back of the book, this is an author for whom setting is vital and he takes the plot, the idea and the essence of the book from its setting and the locations and histories contained within.

If you’ve been to Turkey or not, you will soon be introduced to  this city of spice, thrills, exotic historical stories, rich rivers and golden domes. this is a city which seems to breath mystery and entice you right in to its heart. And this is the book to take with you on any visit for real!

A) Haga Sophia
C) Galala Tower
Back to Results