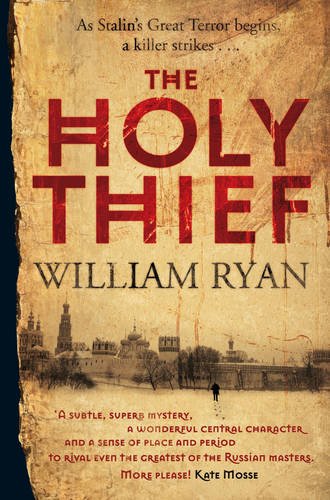 1930s: Russia’s criminal underworld and the organisations during the time of the Great Terror may not be on a normal list for a visit but via literature it can be thrilling and safe.

A young woman is found dead in a church, displayed on the altar.

Captain Alexei Korolev,  works for the Criminal Investigation Division of the Moscow Militia, is asked to investigate. But when he discovers that the victim is an American citizen, the NKVD—the most feared organization in Russia—becomes involved.

Will Korolev like so many enemies of the Soviet state meet his fate in the frozen camps of the far north? Korolev has to find out the truth and so he enters Moscow’s underworld. who can he really trust and who really is the enemy here? Just how under threat is Korolev himself?

A richly imagined recreation of Stalinist Russia, where creeping paranoia can be felt on every page and the vice like grip of the surveillance state a backdrop to the serial murders going on around it.

There is a very interesting gallery of images on the author’s website with images from the time period and descriptions to enhance the reading of the book. Particularly evoked are the streets of Moscow, the fear, the cloak of darkness and the fear of the Militia in and around the stunning yet imposing Russian architecture such as Red Square.