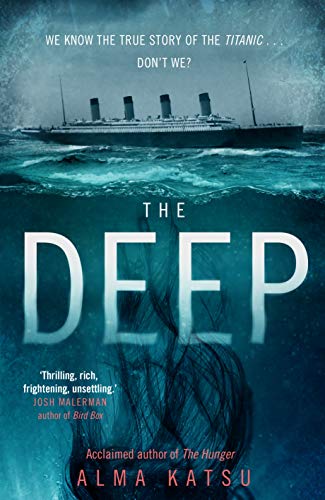 Someone, or something, is haunting the Titanic.

This is the only way to explain the series of misfortunes that have plagued the passengers of the ship from the moment they set sail: mysterious disappearances, sudden deaths. Millionaires Madeleine Astor and Benjamin Guggenheim, the maid Annie Hebbley and Mark Fletcher – are convinced that something sinister is going on . . . And then, as the world knows, disaster strikes.

Years later and the world is at war. And a survivor of that fateful night, Annie, is working as a nurse on the sixth voyage of the Titanic’s sister ship, the Britannic, now refitted as a hospital ship. Annie comes across an unconscious soldier she recognises while doing her rounds. It is the young man Mark. And she is convinced that he did not – could not – have survived the sinking of the Titanic . . .

The story of the Titanic and its sister ship, The Britannic. Both ships were real and their voyages ended in disaster.

There is a keen blend of real and imagined here. Real life millionaires who died during the sinking of the Titanic (John Jacob Astor, Benjamin Guggenheim,  to name but two) There is also a very remarkable and real woman called Violet Jessop who was actually on both ships and survived two disasters! Lucky and unlucky in equal measure!

There were also apparently stories of hauntings that plagued both ships. There is talk of sea spirits, silkies and all kinds of folkloric sea witches and other creatures.

The story of the ship starts in Southampton and ends in the middle of the Atlantic Ocean.