The Deception of Harriet Fleet 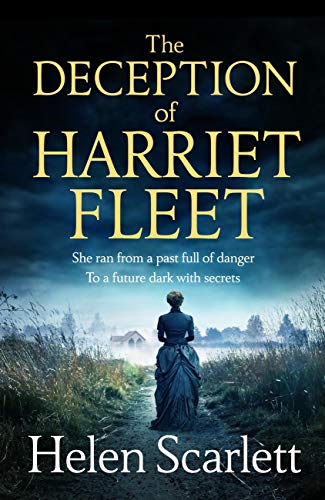 1871: A girl takes a job of governess in a very remote place

An age of discovery and progress. But for the Wainwright family, residents of the gloomy Teesbank Hall in County Durham the secrets of the past continue to overshadow their lives.

Harriet would not have taken the job of governess in such a remote place unless she wanted to hide from something or someone. Her charge is Eleanor, the daughter of the house, a fiercely bright eighteen-year-old, tortured by demons and feared by relations and staff alike. But it soon becomes apparent that Harriet is not there to teach Eleanor, but rather to monitor her erratic and dangerous behaviour – to spy on her.

Worn down by Eleanor’s unpredictable hostility, Harriet soon finds herself embroiled in Eleanor’s obsession – the Wainwright’s dark, tragic history. As family secrets are unearthed, Harriet’s own begin to haunt her and she becomes convinced that ghosts from the past are determined to reveal her shameful story.

” I was just twenty-one when I arrived at Eaglescliffe, a small village in the county of Durham, which was quite as remote s I had hoped. It was then 1871 and already more than two decades after the main events of the narrative. Eaglescliffe was in the process of reinventing itself and grey factories had sprouted up in once green fields. This was the heart of George Stephenson country and railway tracks cut across the landscape, inking together even the smallest of hamlets.”

“The Railway station was a frenzy of slamming doors, whistles and the hiss of the steam engine as it strained to depart.”

Teesbank Hall is of course fictional but there are many places in the area you can pretend is Teesbank Hall.