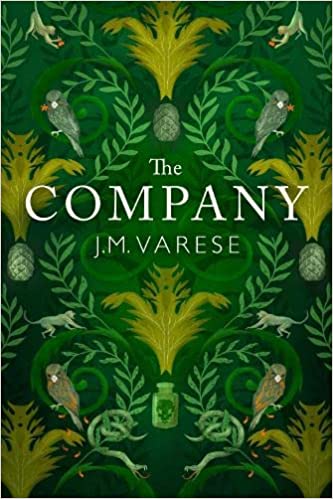 1870: Inspired by the real-life arsenic wallpaper controversy of the late 19th century,

Lucy Braithwhite lives a privileged existence as heir to the fortune of Braithwhite & Company – the most successful purveyor of English luxury wallpapers the world over. The company’s formulas have been respected for nearly a century, but have always remained cloaked in mystery. No one has been able to explain the originality of design, or the brilliance of their colours, leaving many to wonder if the mysterious spell-like effect of their wallpapers is due simply to artistry, or something more sinister.

When Mr Luckhurst, the company’s manager, and the man who has acted as surrogate father to Lucy and her invalid brother John since they were children, suddenly dies, Lucy is shocked to discover that there is no succession plan in place. Who will ensure that the company and her family continue to thrive?

The answer soon arrives in the form of the young and alluring Julian Rivers, who, unbeknownst to Lucy and John, has been essential to the company’s operations for some time. At first, he seems like the answer to their prayers, but as Lucy begins piecing together Julian’s true intentions, and John begins seeing spectral visions in the house’s wallpaper, it becomes clear to Lucy that she must do everything within her power to oppose the diabolic forces that have risen up to destroy her family.

There seems to have been a great deal of arsenic poisoning going on in the Victorian era.  That arsenic was poisonous was certainly not a secret; every Victorian home had a bit of the powder lying around for rats and mice, yet  what they perhaps didn’t know was that they were also applying cosmetics with arsenic in, giving their children toys painted with arsenic, and putting up fancy wallpaper laced with the poison.

The advent of wallpaper was relatively new and people were excited about it. The colours were rich and unique – and arsenic was used to produce them. There was no concern at first as people believed that you could only get ill if you licked the wall in question.

Britain was slow to regulate arsenic, and it was only public demand and new dye techniques that changed things. There were many cases of wallpaper poisoning in medical literature in the mid 1850s. In one case, children died in East London when they licked the green wallpaper in their home. It is said that Queen Victoria had her wallpaper torn down after a guest fell ill whilst at the palace.