The Colonel and the Bee 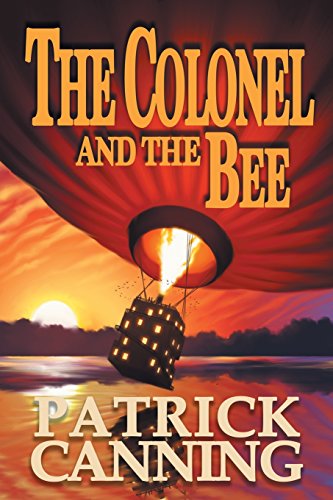 1800s: A travelling circus, an escape and a steam punk adventure

Beatrix, a spirited but abused acrobat in a traveling circus, seeks more than her prison-like employment offers. More than anything, she wants to know her place in the world of the halcyon 19th century, a time when the last dark corners of the map were being sketched out and travel still possessed a kind of magic.

One night in Switzerland, the mysterious Colonel James Bacchus attends Beatrix’s show. This larger-than-life English gentleman, reputed to have a voracious appetite for female conquests, is most notable for traveling the world in a four-story hot air balloon called The Ox.

The criminal seeks a precious figurine, The Blue Star Sphinx, but he’s not alone. The Sphinx’s immense value has also drawn the attention of the world’s most deadly treasure hunters. A murder in Antwerp begins a path of mystery that leads all the way to the most isolated island on Earth.

What dangers await the Colonel and the acrobat?

1. The Alps, Switzerland – Beatrix’s circus travels to a well-to-do Swiss town, whose wealth she confirms by the smell of their beeswax candles. It’s here she meets the Colonel at a dinner party thrown at a lavish mountainside manor. The two of them escape their respective pursuers together, swimming across a frigid lake to reach the Colonel’s hot air balloon, the Oxford Starladder.

2. Antwerp, Belgium – The Colonel on Antwerp: “A bastion of crime and seafood, how I adore this city.” Our heroes travel here to investigate the murder of a riddle merchant in a shoddy bar near the harbor of the city. Beatrix later remarks on the bizarre etymology of the city’s name, which comes from a folktale of a giant cutting off the hands of travelers and throwing them into a river.

3. Jaca, Spain – “A walled citadel in the shape of a star marked the centre of Jaca. The walls had probably been erected to prevent invasion from the French or Portuguese, or perhaps even Genghis Kahn if he were quite lost.” The city of Jaca, located in the Pyrenees mountains of northern Spain, is visited so the Colonel can find a woman to woo for the night. When the normally robust town is found to be wilting under the rule of a despotic magician, our adventurers vow to return and free the citizens from their subjugation. The city is surrounded by fields of the aromatic purple flower known as the autumn crocus, from which saffron is derived.

4. London, England – Most of the events in England take place in a prison and a nightmarish manor, both located in the shadowy woods outside London, similar to Robin Hood’s Sherwood Forest. “The black of the surrounding forest was top-edged with a smoky orange glow from the furnaces of London’s many factories.” London (the largest city in the world at the time) is seen during its shift into an industrial powerhouse, viewed only briefly by Bee as she is kidnapped and taken to an underground lair somewhere within the city.

5. Agadez, Sahel – After a disastrous crossing of the Sahara, our heroes pass into the Sahel, the zone of ecological transition between the Sahara and the more fertile lands that lay directly south. They float into the city of the French Colonial city of Agadez, located in present day Niger. In Agadez, they count on the kindness of strangers, receiving sustenance through coffee and pastries (won by the Colonel’s charm) and a desert grass called cram cram (provided by a benevolent nomad).

Booktrail Boarding Pass:  The Colonel and the Bee