That Summer in Puglia 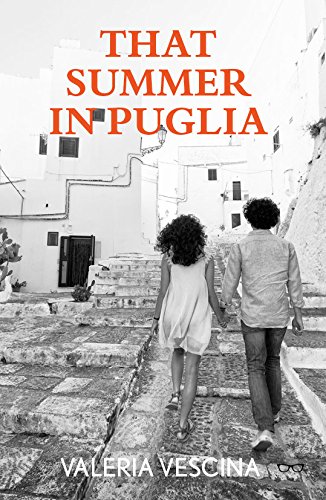 2000s: The story of when boy meets girl, but then tragedy strikes

Tommaso has escaped discovery for thirty years so when a young private investigator, Will,tracks him down, Tommaso asks that he pretends he’s never found him. In the process, he comes to recognise his true role in the events which unfolded. When he’s given a second chance, he may not be ready to take it. For where will it take him?

2000s:For a tale of love, loss, the perils of self-deception and the power of compassion, Puglia offers an ideal setting: as its layers of history and the city itself are central and integral to the story,

The majority of this story is set in Puglia – in the town of Ostuni and its seaside neighbour Villanova. The setting lends itself well to the growing sense of love, self-discovery and digging up the past.

The lead character’s father works in construction and his project is halted when ruins are discovered underneath…that is the symbol of this novel – digging until you reveal the true soul of a person and a community.

The characters discover the city and reminisce about it as they date and discover each other:

“Over the centuries, carts had carved smooth grooves into the white flagstones. The further we climbed, the more closely huddled together the houses became. Arched alleyways opened up alongside us and snaked their way towards partially-seen buildings and hidden corners.”

“My childhood walks with my parents through the Old Town were still vivid in my mind.”

The seaside setting where he and Anna go for dinner:

“Villanova stood out by the shore. We were almost at the edge of the town’s defensive walls, which plunged towards the bottom of the hill…”

“Concetta would buy these directly from the farmers, the contadini, at their open-air market stalls….

Apulians are fanatical about the aptness of each variety to different recipes in the way that only people living where a fruit is produced in such abundance can be….

A single whiff of one of those tomatoes carried with it the scent of dark soil, of the brisk green of the plant from which it had been plucked only that morning, of the sunshine in which it and the contadini had sweltered.”

Milan appears in the story fleetingly as this is where one of the characters goes to study. London is also briefly mentioned as he compares his life there and the beauty and freshness of Puglia. 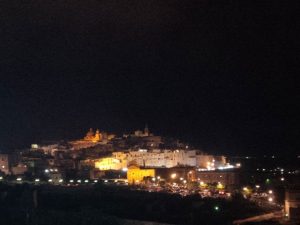 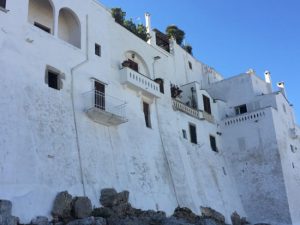 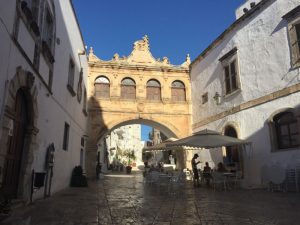 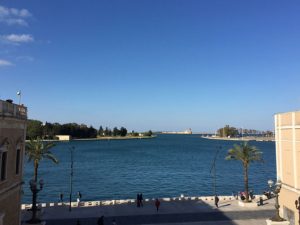 From the gorgeous cover, the couple on the front, take you with them into the book and through the stories of their lives. It’s a tale touched with sadness and poignancy, tragedy and loss but also one of self discovery and second chances. It made me feel sad and wistful but the language was so beautiful, I was carried along and got to care about the two lead characters and their friends.

It’s a simple tale of boy meets girl at first sight, but pull back those layers and it’s so much more – Puglia plays its role in being a mix of old and new, white architecture and old town – mixing two worlds which seem separate but which on closer inspection are very similar. The writing was very lyrical  – like an ode to a time gone but, a memory and of course this story is told by the one person who can tell it all as it happened, or at least how he thinks it all took place.

Th e writing  flows like a river and it was comforting despite the sad events. It soothed me as I read and engulfed me as I immersed myself in the young love of a couple in Puglia and the events which follow.

The descriptions of food, flowers, the old town and the seaside town of Vilanova were particularly enchanting and really gave this novel a keen sense of place. One character even compares the tomatoes from Tesco and the Ostuni open air markets – life now and memories of a time gone by. Such simple images which conjure so much.

Calm and quiet, this novel will linger with you.