Tales from Watership Down 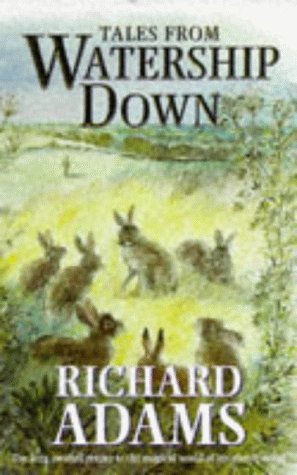 Timeless: The story of the rabbits who now live in Watership Down

A series of short stories which tell the tale of the rabbits who formed and then lived on the warren of Watership Down. This is not  a sequel to the original story but rather a companion showing the lives of the rabbits and their community once the warren had been created.

This is also a collection of the myths the rabbits create about El-ahrairah. These myths and stories are the stuff of rabbit legend as they give an insight into the religion and values of a typical warren of rabbits and the lapine characters who live there.

In Watership Down, the original story of these rabbits, the warren of Sandleford was in danger of being destroyed so the rabbits were forced to move away and search for or even create a new home.

Their journey to this place and their new home was a perilous one and was inspired by the authors chosen town of  Sandleford on the outskirts of Newbury in Berkshire as their country home. However, they were forced to flee and create their new home of Watership Down which they created nearby

They are now settled into their home and the story is like an insight into the humanity of the rabbits and their daily lives. Animals are wise creatures and their sense of community really shines through.

There are many folkstores which are known to all rabbits. Dandelion the rabbit master tells of the legend of  El-ahrairah, the mythical rabbit hero, and his stalwart, Rabscuttle, during the long journey home after their terrible encounter with the Black Rabbit of Inlé (which was the story told in Watership Down).

The world of Watership Down is like a cosy, rabbit community –  each rabbit has their own personality and charm. There’s Hazel, Fiver, Bigwig, and their many companions. The story of how Hyzenthlay becomes female Chief Rabbit is an iconic moment as is how the sense of smell, the smell of man is both a curse and a saviour.

This book is best enjoyed curled up in a chair, cushion or in some sort of cuddly hole to really feel like one of the characters.