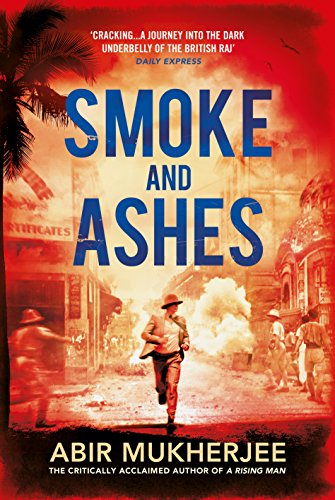 1921: Captain Sam Wyndham is battling many things as well as an opium addition.

India, 1921. Haunted by his memories of the Great War, Captain Sam Wyndham is battling a serious addiction to opium that he must keep secret from his superiors in the Calcutta police force.

When Sam is summoned to investigate a grisly murder, he is stunned at the sight of the body: he’s seen this before. Last night, in a drug addled haze, he stumbled across a corpse with the same ritualistic injuries. It seems like there’s a deranged killer on the loose. Unfortunately for Sam, the corpse was in an opium den and revealing his presence there could cost him his career.
With the aid of his quick-witted Indian Sergeant, Surrender-not Banerjee, Sam must try to solve the two murders, all the while keeping his personal demons secret, before somebody else turns up dead.

A history lesson and an immersive reading experience. Abir Mukherjee evokes and interprets the Calcutta of the 1920s

British Rule in the country

“We could only control India through force of arms, but force was useless against a people who didn’t fight back; because you couldn’t kill people like that without killing a part of yourself too.”

Sam considers and is shocked at the absurdity of this rule:

It struck me that was the real problem. To see a man as your enemy, you needed to hate him, and while it was easy to hate a man who fought you with bullets and bombs, it was bloody difficult hate a man who opposed you by appealing to your own moral compass. And we British considered ourselves a moral people. What else was the vaunted British sense of fair play but a manifestation of our morality? … the British and the Indians weren’t that different, and the way to beat us was to appeal to our better natures — to make us comprehend the moral incongruity of our position in India.

Rules of the Raj

“The fact that the demonstration itself was illegal had been conveniently overlooked by all concerned. As usual, the whole thing felt like a game where both parties agreed which rules applied and which could be discounted. Rules, after all, were important. You couldn’t play the game without them, and fortunately the Indians seemed to love rules as much as we did.”

“We alighted as a detachment of Sikhs in olive-green uniforms and turbans marched past in time to oaths shouted by their sergeant. It was hardly a surprise to find these men from the Punjab here, a thousand miles from their homeland. The regiments billeted here tended to be from far away: Jats, Pathans and the like. It was a well-known fact that native troops were more willing to do our bidding when they were far from home…”

Gandhi did call for non-violent, non-cooperation with the aim of independence by the end of 1921, and amid the turmoil, the British Government really did send Prince Edward, later King Edward VIII who married Mrs Wallis Simpson and then abdicated on a  goodwill tour.

Porton Down has, for over a hundred years, been the home of the UK Ministry of Defence’s science and technology laboratory. Their scientists, as they were later to do with British and Australian troops, DID carry out biological tests, including mustard gas experiments, on unsuspecting Indian troops, though these experiments took place mostly during the 19308 rather than during WW-I. The clandestine tests were carried out at a facility in the city of Rawalpindi, now in Pakistan.