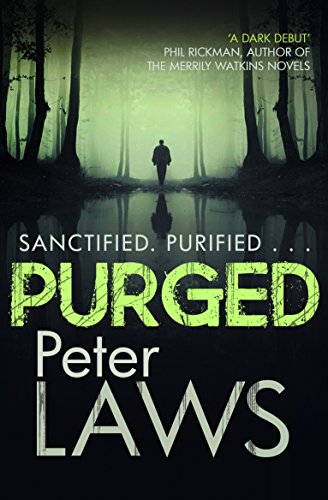 2000s: Written by a minister, this delves into some dark religiously motivate crimes

Matt Hunter lost his faith a long time ago. Formerly a minister, now a professor of sociology, he’s writing a book that debunks the Christian faith while assisting the police with religiously motivated crimes. On holiday with his family in Oxfordshire, Matt finds himself on edge in a seemingly idyllic village where wooden crosses hang at every turn. The stay becomes more sinister still when a local girl goes missing, followed by further disappearances. Caught up in an investigation that brings memories to the surface that he would prefer stay buried deep, Matt is on the trail of a killer determined to save us all.

A (luckily fictional) village just outside of Oxford where Matt Hunter is on holiday with his wife and where they find wooden crosses everywhere – in shops windows, houses, as well as the church. Wren has been invited to be there as she will be working in the church, helping them to redesign the interior.

The themes of christianity, the clashes over believers and non believers, the process of being purged, the ritual of it all, the idea of cleansing and the cult like expectations and procedures.

Hobbs Hill is the village where Christianity rules and woe betide any outsiders who stain this landscape. There is some dark goings on in this novel, some very dark goings on indeed ut you’ll never forget your visit to this place! There’s the Kingdom Come Church which is a “Colossal old gargoyle crouching on the top of a hill”.

“Its centuries-old spire crumbled at the edges, threatening to topple over at any point and spike someone in the heart”

There’s a smattering of locations linked to the crime and Matt’s past also on the map but Oxfordshire and Ipswich are the main settings for the central story.

Purged (and its sequel Unleashed) has a full, original soundtrack album that the author has released. They’re streaming free here: peterlaws.bandcamp.com

Even the churches look deadly in this novel!

Ooh this is a dark one! I was compelled to read it though since the author is “An ordained Baptist Minister with a taste for the macabre” Now that’s not even the prologue or blurb but it drew me in right there and then.

Matt Hunter is a very unique and fascinating character. He’s witty, full of acerbic asides and a professor who thrives on his work with the police.  His past, as a minister comes to life, slowly but surely and it’s a dark and sad past, that’s for sure.

At first I though the religious themes wouldn’t be for me but cast those thoughts aside as this was gripping with a dark and dangerous heart. It was interesting to see how religion affects people, the believers and non – believers and the consequences of  a loss of faith or a strengthening of it.
The killer in this book is killing those they think are worthy of going to heaven and they want to be the one who sends them there. The plot is tight and fast but it didn’t half give me the heebie jeebies more than once. The first chapter will tell you this ain’t  Grantchester!