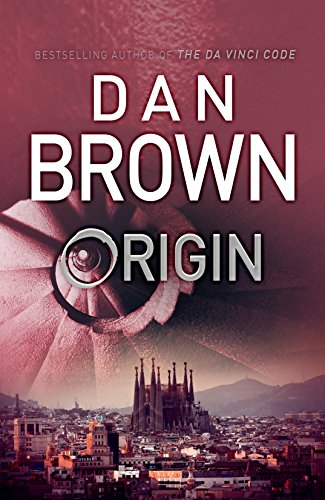 2000s: Robert Langdon has to face the most important challenge yet -a  discovery that “will change the face of science forever”.

Robert Langdon, Harvard professor of symbology and religious iconology, is invited to the Guggenheim Museum Bilbao by one of his former students Edmond Kirsch. Kirsch is now a technical expert and maverick. His words, actions and inventions have made him a figure of controversy across the world. Now he has gathered the chosen few, to showcase an astonishing scientific breakthrough to challenge the fundamentals of human existence.
However, the evening does not go to plan and soon Langdon finds himself being hunted. He escapes with the museum’s director, Ambra Vidal. Together they flee to Barcelona in the search of answers, to where Edmond Kirsch once lived.
It’s in Barcelona, home of Gaudi, ancient history and even older secrets, that a trail is revealed. One marked only by enigmatic symbols and elusive modern art.

It’s what at the end of that trail – a secret so powerful that it will blow apart everything, even existence itself.

Don’t worry – no spoilers – the events here and on the map which take place at these locations are not mentioned and the descriptions vague. The fun of this is discovering this trail for yourself!

The King of Spain in the novel is ill and his son Prince Julian is the one who will soon take over the throne. He however is facing a very large problem, one which starts in Bilbao and attacks the very throne on which he is soon to sit. This palace is the scene of significant debates and revelations in the novel. Plenty of hidden corridors it would seem…

Yards away from the Royal Palace, is where Bishop Valdespino in the novel is based. He has very close ties to the royal family and is the King’s right hand man on all things religious and more.

Whatever you expect to find in here, you’ll not see anything as out of this world as the revelation of Edmond Kirsch! It’s where he holds the event to do the big reveal – held in front of a select few, ultra tight security and broadcast live to the world at the same time. Imagine the tension! The excitement is palpable and the art installations on the way over to the museum, via the Selva Bridge, not to mention the awe inspiring art on your way in…..Astounding on every level. You might want to take an automated guide after reading the novel…..but beware of black curtains and what might lie behind…

The novel opens here and there is a very important meeting which takes place here. A meeting which will have repercussions. In 1025, a new monastery was founded at the hermitage of Santa Maria de Montserrat. The little monastery soon began to receive pilgrims and visitors. These contributed to the spread of stories of miracles.
In 1409 the monastery of Montserrat became an independent abbey.

Langdon remembers his visit here as a student, looks at the artistic significance of the objects and thinks of the tiles here and on Spanish streets – the hexagonal panots –  tiles which seemed to be decorated with squiggles but if arranged the right way formed a particular pattern. There is Gaudi art even in the street tiles if you know where to look. It’s an artistic marvel featuring ” grottoes with fountains ressembling dragons, and fish and an undulating white wall so distinctively fluid that it looked like the whipping flagellum of a giant single celled creature”

Wait until you discover the story and secrets behind this house! No spoilers as it’s crucial to the plot so suffice to say that you will want to visit for real as soon as possible. If the already huge numbers of tourists doesn’t increase after people read this book…

This plays a pivotal role in the story and Dan Brown is keen to post a few interesting snippets about the house that you may not have heard of such as the fact that the structures and alien like chimneys actually inspired Star Wars. It ressembles an “Excavated mountain, sparking its now popular nickname “La Pedrera” – meaning “The stone quarry”

A major place of interest in the novel and of course it also majestically appears on the cover of the HB too. This is where the secrets will unfold and it’s the story behind the cathedral itself which is also of note.

” For more than a century, Gaudi’s controversial Basilica de la Sagrada Familia had been under construction, relying solely on private donations from the faithful. Criticised by traditionalist for its eerie organic shape and use of “biopmimetic design,” the church was hailed by modernists for its structural fluidity and use of ‘hyperboloid’ forms to reflect the natural world”

– There are also brief visits to Dubai and Budapest but the main setting is Spain and the majority of the novel is set there – There are also some locations towards the end of the book which aren’t included on the map as they give the game away! 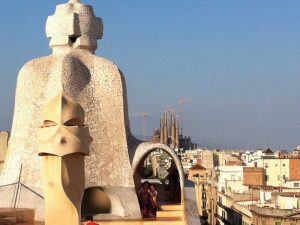 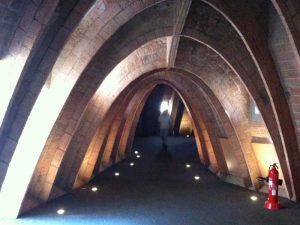 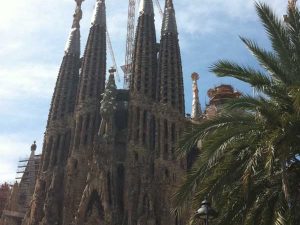 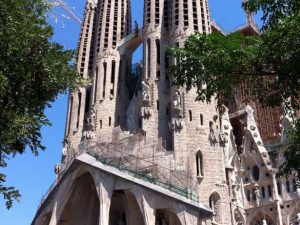 I have to take my hat off to Dan Brown. He’s found a very exciting and controversial once again and moulded it in to a fast paced thriller that kept me on edge and racing through the pages. I was dying to know that reveal! Aah and the twists and turns to get there!

It’s bound to be a film – I hope so as the cities it’s set in are some of the most stunning in the world and the history of Barcelona and Gaudi for one is something which really interests me.

The book hits the ground running from page one and never lets up. Short snappy chapters make for easy reading but they’re just places to breathe for the most ardent DB fans. There’s so much detail and science stuff in here but don’t worry it’s all accessible and things you’ve heard of before ( and some that just might be true and what an interesting world THAT would be!) It seems so relevant and up to date too – Iphone hacking, “Siri on steroids”, Artificial intelligence, Uber taxis, where we came from, where we are going, what religion teaches us, why we believe in what we believe in…struggles of those who believe in the old world order,those who seem fixated on advances and technology …..scary when you think about it. This era of phones, social media, the ability to trace, contact people….all woven into one very tightly drawn plot.

As a book lover, I can happily say that books are the KEY to knowledge and clues in the plot and we get to see several old libraries in this book. I did linger over those chapters and immediately need to go to Barcelona. Books, poems which hide secret meanings. Excited shivers all round!
It’s hard to say too much about this book unless you want to give spoilers and  I read it without any outside influence. In a dark room, with no windows, but a bright light and some headphones with a voice in my ear….Ok so not really, but this would be something else on audio book!
Favourite character by far?  Winston….What am I going to do now I’ve read this book? Read a certain book of poetry..go to Barcelona, and look more closely at certain places..

Highly Recommended. A trail around Spain’s history, art and churches is not to be missed!Where have we come from and where are we going?