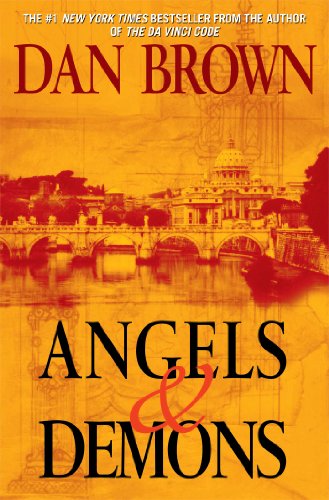 2000s – Whatever you think of Dan Brown and his prose, he writes some of the best ‘booktrails’. We got to see many churches and symbols on architecture that we would not have seen without this book.

Harvard symbologist Robert Langdon is summoned to analyze a mysterious symbol seared into the chest of a murdered physicist. It is the sign of the Illuminati, the now underground and most hated enemy of the church.

Langdon and the others soon discover that the Illuminati are on a mission to destroy the church by allowing the antimatter they have stolen to explode at the heart of the Vatican.

For maximum effect, this explosion is set happen on the eve of the Vatican holy conclave. And the four favourite cardinals to be elected have been kidnapped and set to die, one every hour before the final ‘explosive’ finale.

This is quite some guide to this very touristy city and you will certainly see it in a different light! A fun read. Just don’t take it with you into the Vatican. We hid our copy in a plant pot – well it felt kind of wrong to sneak it in. (There were also Angels and Demons guides when we were there)

See The Vatican and Rome via symbols, hidden crypts and historical hatred.

We were absolutely fascinated to learn about the Vatican, the conclave, the secret passageway and the smaller churches and statues dotted around Rome that we may not have seen were it not for this book. This is the ultimate guide book of Rome – see the sights through Dan Brown’s eyes as well as those of Robert Langdon – you will not be disappointed.

The novel starts off in Geneva at CERN which starts off the mystery that takes us to Rome….

See the Pantheon – where Langdon and Vittoria sit down to puzzle out the meaning of their only clue: From Santi’s earthly tomb with demon’s hole, ‘Cross Rome the mystic elements unfold”

The Piazza Barberini also deserves a mention. As Langdon and his side kick race through the streets getting some clues wrong and other right, you see the city in a very unique light and learn a little about the event that is Conclave.

I love Dan Brown novels as you always know what you’re getting and that it will be a cracking read. You can’t deny the level of research and unusual topics and theories that get into his novels and the man does get those tourists flocking!

Everyone loves a good conspiracy theory and when it involved science, religion, art and intrigue plus a tour of some of the most stunning churches and religious sites around Rome, this is a great read.

How true some of Dan Brown’s claims are is besides the point. He’s still taken some information and dressed it up into one great adventure with the possibility of what if?

Say what you want about Dan Brown  -he knows a book trail when he sees one – he creates them in a way that combines  adventure, intrigue, solving clues and a good old fashioned race against time.