On Track for Murder 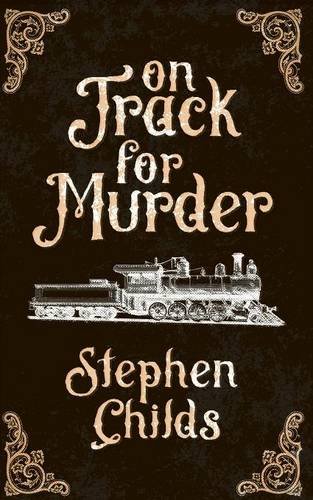 1897: Welcome aboard the SS Elderslie. Your passage to Australia awaits…

Abigail Sergeant and her brother,Bertrand, are looking forward to their new life. They’re travelling on the SS Elderslie from England to Australia. It’s a long journey but one which they need to do, for if they had stayed in England, it’s likely that Bertrand would have been committed to an institution before he reached adulthood.

This new lifem their new destination is hopefully going to provide them with the freedom and security they need. However, as they arrive at Swan River, they realise that life on the other side of the world is not exactly the peaceful start they had hoped for. Far from it in fact. For a  murder takes place and Abigail must then go on an arduous journey across Australia in order to uncover the truth and protect her family and an innocent from jail

Stephen Childs guides you around his settings: (Spoilers!)

The first location in the book is Fremantle. This is the port town to the west of Perth, at the mouth of the Swan river. Fremantle is the place where the first settlers to the area arrived and is where Abigail and Bertrand disembark the Elderslie after their sea voyage. The long wooden jetty is long gone but the railway still operates in the port area.

Travelling up the Swan river, past Perth itself, you arrive at Guildford. This is where Abigail’s father lived and where she spends most of her time while in the Swan colony. The family home by the river is where the murder actually takes place. Guildford is, today, a great place to see restorations of some of the Swan colony’s historical buildings.

Midland is not far from Guildford. It’s the location of the railway workshops, which were in the process of being moved from Fremantle at the time of the novel. Abigail spends half a day there hiding from an angry Stanley Larkin, unaware that her father’s murder is being committed at that same time. Midland is an area that is currently reinventing itself for modern living but which remains true to the history of the railway workshops.

About 130 km south-east from Perth is Beverly. It’s only accessible by road nowadays. Beverley is where Abigail’s train stops for the night. It’s from Beverley that she commences her desperate run down to Albany after the angry sailor, Stanley Larkin, catches up with her.

Albany is the main town on the south coast of Western Australia. It’s where Abigail finally discovers the final piece of evidence. You can still stroll along Sterling Terrace and gaze out over the railway line to the bay beyond and imagine Abigail waiting patiently for Ridley to return.

Michaelmas Island sits several kilometres south-east from Albany in King George Sound. This is the Island where the abductors had their hideout. The coastline is very rocky and landing a boat in the way described in the book would be quite dangerous.  It’s now a conservation reserve but does provide some interesting dive sites.

Susan: @thebooktrailer
This is a real swashbuckle of an adventure and a lot more than I first thought. Reading this for Blogival, I was keen due to the title and the time period. I have to say that the idea of travelling on a boat from England to Australia has also appealed but I’m glad I did this one just via a book!

It’s not a quick moving book but each stage is carefully thought out and part of one great adventure. The boat journey to Australia tells you a lot and sets the scene – I could feel the spit of the sea and the sense of foreboding as the coast of Fremantle came in to view.

The real journey starts in Australia itself and this was where the book really came into its own I thought. The idea of only having five days, be in a race against time to get to the truth, well I was right behind Abigail every step of the way. Constable Ridley was a great character and I smiled more than once at the relationship between them

This was like an old fashioned puzzle that I must admit I didn’t want to work out until I read the end as it was a lot of fun getting there. Great characters, excellent scene setting and a long and exciting mystery to solve. I did like this one!