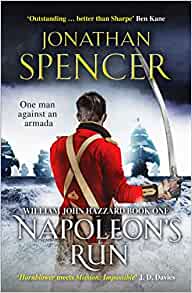 Late one night, a junior naval officer at the Admiralty intercepts a coded despatch, marked with blood: Napoleon Bonaparte is about to launch the largest invasion fleet in history. Target: unknown.

England is vulnerable, bereft of allies, and the Sea Lords fear a direct assault on Britain. Admiralty Intelligence sounds the alarm and prepares to unleash Nelson and the Mediterranean squadron.

But before they can, they need vital information. They need a special officer to infiltrate by land or by sea to uncover the destination of Napoleon’s armada – a man who never stops.

Discover the journey of Napoleon

Set during the Napoleonic wars. The main character is William Hazzard, a Lieutenant of Marines.

He believes that he has been betrayed. He blames the Admiralty and the British government for abandoning him and betraying him.

His goal now is to locate and stop Napoleon, his fleet and his mission. This is a novel set on the high seas with all the swashbuckling action that a good historical thriller can add. This is a mix of fact and fiction as real life people such as Emma Hamilton and Admiral St Vincent are also in the novel.